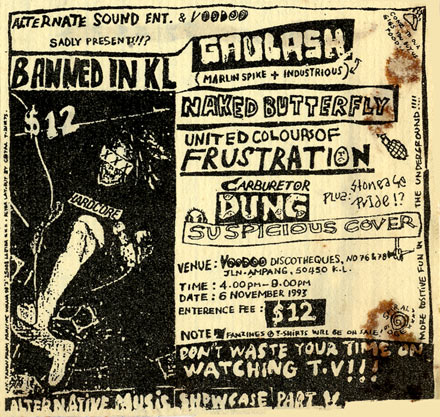 Also known as “Alternative Music Showcase V”; which denotes that possibly there were four other shows happening before this one. Hmmm.

One of the first few gigs we played! This flyer is made by Fendi! Very rare shit. At the left side of the flyer it said: “Flyer lay-out by Cotar T-Shirts 1993”. Cotar T-Shirts was Fendi’s name for his DIY t-shirt label those days, which were operating at 121-C, Jalan Tun Sambanthan 3, Brickfields – where Naim and Aru (Koffin Kanser & Republic of Brickfields) are still staying at after all these years. It was also Dung’s house, as three of us in the band were staying there (me, Fendi & Shahlan). 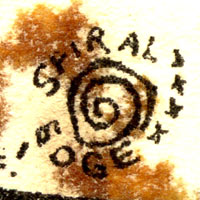 SPIRAL EDGE: On the right side of the flyer, we have the old Carburetor Dung’s “Spiral Edge” logo, a statement making fun of “Straight-Edge” which was quite trendy in the scene then. Me and Fendi used to scrawl the sign on the back of our hands with marker pens! For us then, it said “we smoke, we drink, we have sex and we do whatever we want!”

According to the “Dung Book” (a green ledger book where we jot down our notes, lyrics and paste up letters from people and also flyers), snippets from the show was shown on the TV3’s Melodi (a very popular entertainment news programme, shown on Sunday afternoons). I wonder if the TV3 archive would still have all the footages taken. 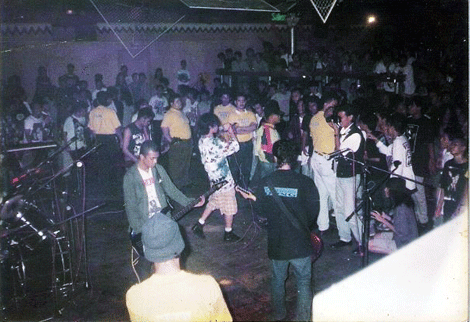 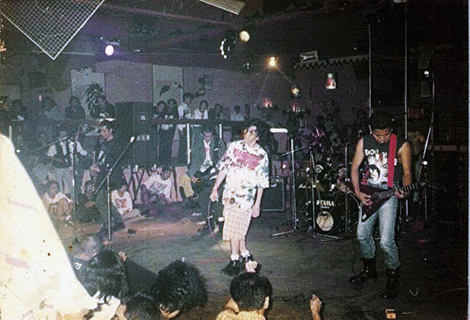 GAULASH – This was a side-project of Eddie MARLINSPIKE and Eddie/Edy INDUSTRIOUS (who later to go and form the skinhead band ACAB, and now the leader of Gerhana Skacinta). Both Marlinspike & Industrious were the main proponents of the early Malaysian industrial scene, influenced by Earache’s projects such as Godflesh and Pitchshifter. Industrious also featured Tang Wim Poh (who is now well-known as the boss of Clockwork Records). When Edy started to get into the skinhead thing, many of us were quite surprised as he was a huge fan of industrial music. It was quite a departure to go back from such a modernist post-punk style to old traditional Oi! sound.

SUSPICIOUS COVER – if I remember correctly, this is a band featuring our ol Central Market friend Mie Ronggak from Seremban, and they played something like what NAKED BUTTERFLY was doing then, energetic funk-rock thing influenced by Red Hot Chili Peppers, Faith No More and Infectious Grooves.

UNITED COLOURS OF FRUSTRATION – This is a trio featuring Ian Theseira (guitar/vocals), his then girlfriend Nini (bass) and Azmir (drums). Azmir was a member of the original SPIRAL KINETIC CIRCUS who appeared on the A Circle of Friends compilation. United Colours of Frustration later changed their name to “STATIC” or was it that they were known as “Static” before? That I can’t remember. Anyway, they were one of the very few local bands then who were pretty much influenced by Sonic Youth & Dinosaur Jr. The played a lot of shows in both incarnations, including Piccadilly and a gig at the National Art Gallery.

A few years later, maybe 1994, both Ian and Azmir joined me in the reformed DEFLOWERED and we recorded two songs for a VSP alternative compilation tape called “The Friday Jam”, a project initiated by Boy Cina (who went on to play with Apple Geen). That was the last time Deflowered recorded anything. Deflowered never played live too. Ian and Nini then disappeared from the scene for a long time. These past few months I have been hanging out with Ian again but last weekend he yet again disappeared.

So what happened to Azmir? Well, you know “Numlock”, a name constantly credited on BUTTERFINGERS albums? That’s him. He was also involved with the drum’n’bass crew SPACEBAR COLLECTIVE (with Irman, now with KLPHQ). He’s now working at a audio post-production studio in KL. Ian and me was trying to get him to reform Deflowered but he was too busy. He’s one of the few people from the old Central Market scene which I would meet constantly and hung-out with till today.

NAKED BUTTERFLY: I think this is one of the first few gigs by Naked Butterly, headed by Oz (who was playing with a thrash metal band called ASSAULT during the Metallica Lounge days). They went on to release an album in 1996 (I think), did a tour playing Kuantan, Kedah and Penang! Also reformed to play with us at the I Thrash Therefore I Am show in August 2004. In the late 90s, Oz was an integral part of the REPUBLIC OF BRICKFIELDS. He became a consumated busker on the streets of KL a few years ago and now undergoing rehab.

Singer Adrin is now working as a travel guide/agent, doing tours of the east coast, this is the same thing as what Adik (ex-CHRONIC MASS singer) is doing nowadays. The drummer Che Mat (who used to play with the first incarnation of Carburetor Dung in 1989) was the drummers’ drummer back in the day. He played with almost all the bands then especially SILENT DEATH. He went on to do session work with many local pop-stars, including Sheila Majid! Don’t know what he’s doing now though.

Phew! There’s a lot of history on this gig. If you guys know anything else, do add in the comments.