This only being rediscovered recently (Oct 2014), when our old friend Din Sarawak posted these pictures of a VHS tape from the show. 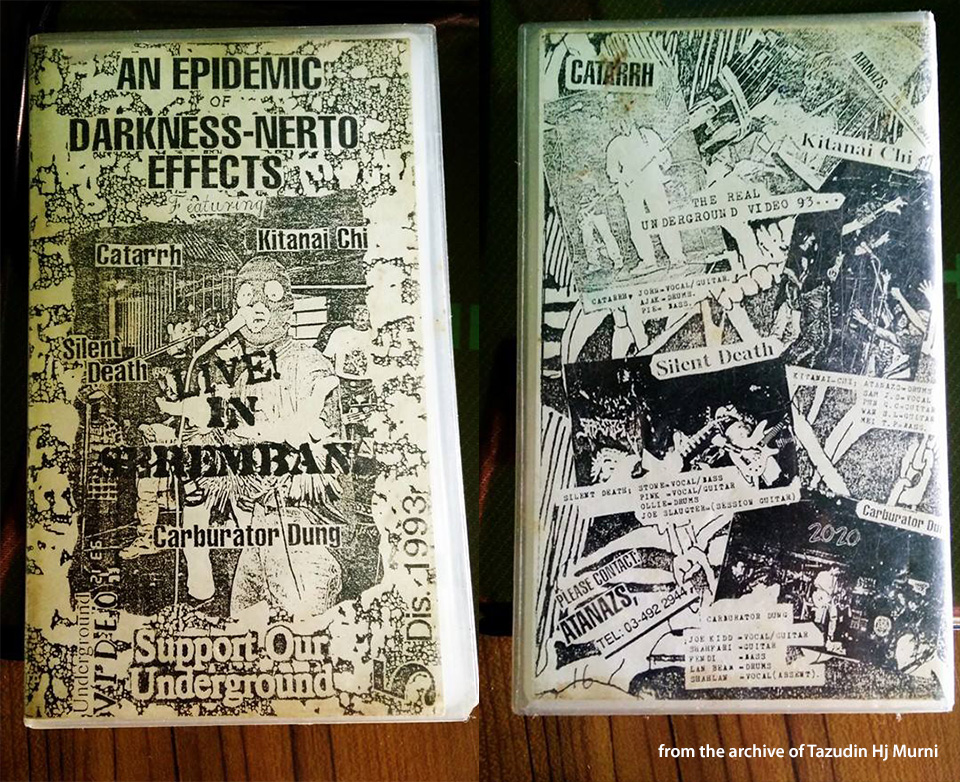 “This is actually a metal show with SUFFERCATION, SILENT DEATH & KITANAICHI but Carburetor Dung was suddenly invited to go up and play – we were all there just to see our friends play. Played four songs with Joe on vocals due to Shahlan’s absence.”

Here’s a pretty important archival find by our old friend Tazudin (AKA “Din Sarawak”) who posted this picture on his facebook page a few days ago.

It’s a VHS video documentation of an early Malaysian extreme metal gig held at Club 20/20, Wisma Punca Emas, Seremban – Sunday, December 5th, 1993. It was a special show, not only for Din who was organising his first gig ever, itâ€™s also one of those rare occasions where a number of us who were regularly hanging out at the Central Market decided to go on a trip together.

We took a chartered bus down to Seremban that day. Yes, a chartered bus to see our metalhead friends – SILENT DEATH, KITANAI CHI & CATARRH – playing a show out of Kuala Lumpur. The bus was pretty packed and the ride to and fro Seremban were filled with much boisterous impromptu singalongs, bad jokes and the usual laddish merry-making.

The show was memorable for me because of three things. First, the communal, full-on camaraderie-fuelled bus ride as mentioned above. Second, the theatre/spectacle of it all. I remember a bunch of us hanging out at the back wall of the venue, all struggling to stay focussed, tight-lipped and not burst out laughing at the sight of our good friends trying their utmost best to appear as the most-est evil-est band on earth.

Their faces smeared with corpse-paint, arms wrapped by nasty, spiky bands (with rusty 3-inch-long nails sticking out with much horror), standing legs akimbo in their most impressive â€œIâ€™m Cronos of VENOMâ€ battle stances, their long hair spinning whirling dervish-ing along with the double-pedal propulsion, stopping to only bob-to-the-rhythm with neck-punishing headbangs.

Some of the bands members were biting onto blood-pills in their mouths, so as to have that bloodied, â€œIâ€™ve just ate a fellow human being and I donâ€™t careâ€ look, while one of the bands frontmen went a bit too far and accidentally swallowed his pill whole.

The third reason why I remember this show so well is because we too played the show. We were there to see our friends play and to have a good time at it; still, at at the end of the gig the organisers realized four-fifth of CARBURETOR DUNG were there and thus decided to call us on stage for â€œa bit of a pogo session” – and so we ended the night with about four songs.

It was a sight to see when we did our impromptu set; all these most nefariously â€œevilâ€ extreme metalheads dropping their murderous stance and thrown themselves wholly into slam-dancing, pogo-ing and â€œjoget-ingâ€ in front of the stage; laughing and giggling, mock-kicking each other – totally out of character for serious â€œmetalâ€.

Our bassist Fendi also accidentally â€œproved” that we, the DUNG, were too pretty much as â€œblack metal, evilâ€ as the rest, when the enamel-white bass guitar he used ended up splattered with real blood. Fendi, who forgot to bring along his guitar pick, had proceeded to play without and thus cut his bare fingers in the frenzy.

Those were the days.