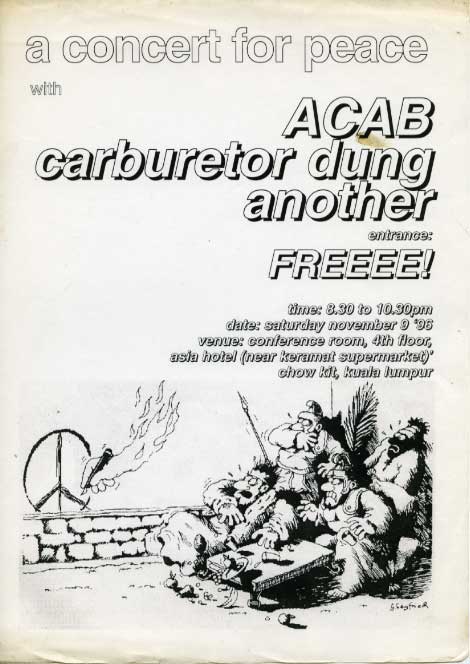 Organised by a couple of NGOs hosting a conference on the East Timor, the show never took place. The conference were disrupted by a gang of UMNO Youth, helped by the police.

here’s an excerpt of a report by London’s The Independent:

Kuala Lumpur (Agencies) – Delegates to an international conference on East Timor yesterday told of their fear after their meeting in the Malaysian capital was broken up by government thugs.

Some 200 demonstrators from groups allied to Malaysia’s ruling coalition barged into the meeting room, hurling chairs and tearing down banners. Police then moved in and detained 49 foreign delegates, expelling some of them.

Andrew McNaughtan, convenor of the Australia East Timor Association in New South Wales, flew into Manila after he and 15 other activists were expelled. “They ran amok, overturning chairs . . . and screaming . . . They were extremely threatening.” Mr McNaughtan told Reuters.

“I was very frightened. . . A spark at any moment {and} it could have turned into a bloodbath. . . It was very frightening because these people were quite irrational.” About 20 police officers stationed outside the hotel where the conference was taking place did not stop the pro-government demonstrators from entering. The demonstrators tore down banners and hurled chairs and tables, ransacking the room for about half an hour. The protesters then retreated to the streets.

Among those arrested were a British journalist for the Hong Kong-based Asia Week, an Australian working for the Australian Broadcasting Corporation and two local reporters. “This is shameful. It is not a good reflection of the people. It is sad,” said Hilton Deakin, a Roman Catholic bishop from Australia, and one of the delegates facing deportation. Malaysia’s Deputy Prime Minister Anwar Ibrahim denied the youths acted with government sanction. But the government had warned that it planned to prevent the meeting from taking place.

Malaysia feared the meeting, initially scheduled to last until Monday, would embarrass its South East Asian ally Indonesia. Diplomats suggested other South East Asian nations were closing ranks behind Indonesia after Jakarta was severely embarrassed last month when the Nobel Peace Committee awarded the 1996 prize to two East Timorese. The Philippines has banned one of the two prize-winners from travelling to Manila during the forthcoming Asia-Pacific Economic Cooperation forum summit.

The conference was intended to highlight the independence movement in East Timor, a former Portuguese colony annexed by Indonesia in 1976. This week sees the fifth anniversary of a bloody confrontation in Dili, the capital, between troops and demonstrators following a funeral for an anti-Indonesian activist shot dead by soldiers. It is estimated that Indonesian troops killed at least 200 people.