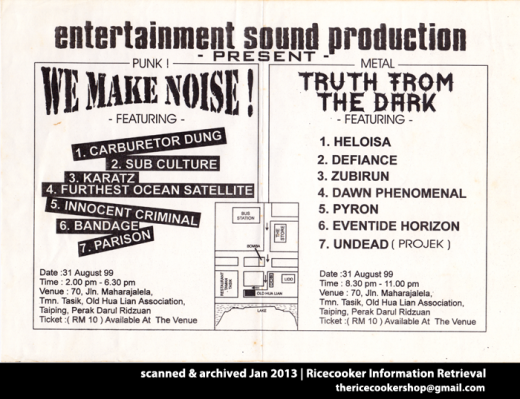 One day, two shows – punk during the day and metal at night.

update: May 22nd 2012 – Poodien put up two pictures he took during the show and that triggered a bit of conversation copied below. 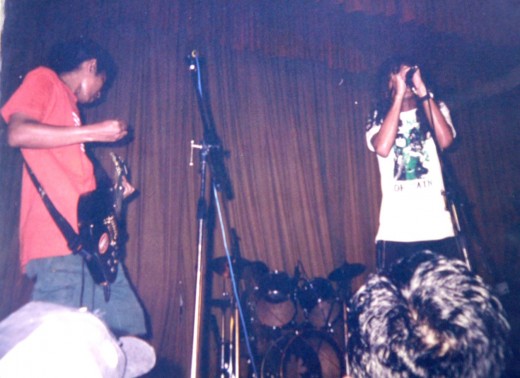 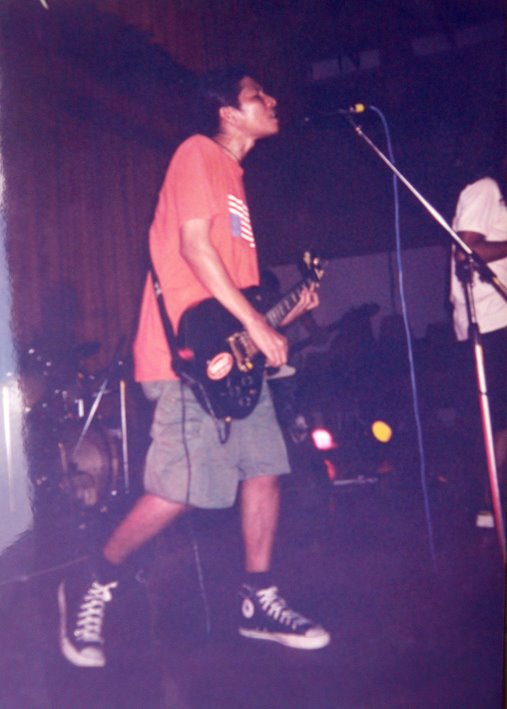 “The Propaghandi t-shirt was given to me by a friend from Canada who got beaten up by a bunch of holidaying American soldiers at an island in Southern Thailand, basically because of the image – an upside-down American flag with the words “Fuck right off!” on it. He said, “Joe, you should take this shirt away from me, I’m traveling and I don’t want to get beaten up again!” – Joe

“…I remember this gig. It was a hot and humid day in Taiping. The sound system was overheated from the previous bands, the soundman was a piece of shit, too many spotlights on the stage, i had a massive headache from screaming my lungs out and from the heat on the stage but as usual we gave all we got. Ollie came with his girlfriend and so did i, that left Joe with Fendi and that made communication between us a bit dodgie. At the end of the day,i’m glad that my girlfriend is now my ex-wife and Joe is still my best friend.if you play in a band and have a girlfriend, love your band more, believe me it pays…ha ha ha.” – Lee

“what i remember was how Ollie left right after the show. And that triggers a lot of things in the band until we went on a long hiatus.

also I noticed there were a bunch of Chinese kids slamming in the front of the stage when we were playing – a rare sight. After the show I approached them and they told me how they all have few bands in between them but their bands were never considered or invited to play shows. I asked why and they said, “dunno? maybe because we’re Chinese?” – Joe