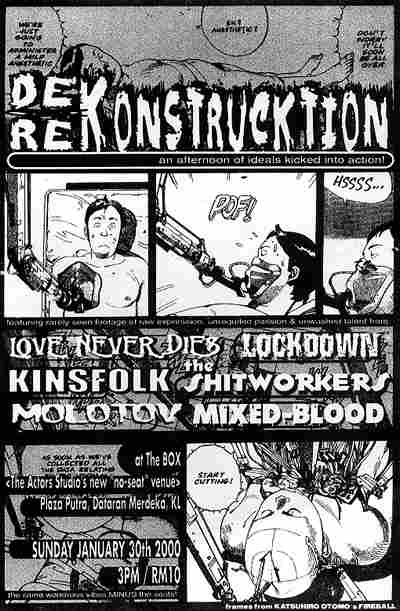 The Shitworkers, an off-shoot of Carburetor Dung with me (Joe), Fendi and Bullet (very OLD TIMER! drummer for PUNISHER in the early days of the scene – 1988) will be playing our first gig on Jan 30th. That is if everything goes well. Will inform you people when it’s confirmed.

First of all: The Shitworkers will play again on March 27th in Ampang and we will add a couple of new songs too.

Here’s the posting which was bounced by the mailer due to my account topping up, now everything’s back to normal, so here it is two weeks later!

The Shitworkers had our first gig ever (after the two initial 1994/95 gigs) yesterday at the Actor’s Studio and everybody said that we did well, and that’s a pleasant surprise since we only had about 6 rehearsals. The overall sound was a bit sickly since the guitar & bass amps were not miked, so as usual, the vocals and drums were pushed out front (that is unless you were out in the front nearer to the amps).

The gig has about 400 people packing up the small but excellently punk rock new venue. It was hot and sweaty and crowded, just the way we liked it. I broke a string on the guitar while playing the first tune (LURVE), then broke another string on the second (borrowed) guitar on the second song (UMNOT) but carried on playing without changing the string nor the guitar.

The third and fourth song (UGLY and TOO TOUGH) went well, albeit a bit haywire due to the guitar. The last song (FINGER) was speeded up 100% by Bullet’s sudden pummel so it went breakneck with no relent, way beyond what it supposed to sound like. Weng, the organiser, told us we sounded a bit like FUGAZI (!), which is flattering but we don’t see how, while everybody else we met commented with that word “intense”.

We also sold off 9 t-shirts! Not bad for an “OLD BOY-BAND”! So off we went to a Chinese warong at Petaling Street to celebrate!

Thanks to those who came to the gig and bought the tee. We have been asked/invited to play at many more gigs all around the country, so I’ll keep you posted. Those who want to have the Shitworkers t-shirt, just send us RM18 postpaid.