A Review: I Thrash Therefore I Am! by Daryl Goh

Reunion: The underground scene’s magnificient seven
featured in The Star on August 3rd 2004

The original underground scene made a one-off reunion in Kuala Lumpur last Sunday. DARYL GOH relished the return of the bands that broke boundaries and built the Malaysian non-mainstream.

THERE is this celebrated myth about the birth of the underground music circuit in Kuala Lumpur that recalls how a bunch of scene-making individuals in the late 1980s picked up a dictionary, browsed randomly through the pages and started choosing menacing band monikers for themselves. Everything, supposedly, began in Central Market in town and out of that infamous band naming, blood-bonding ritual, emerged the nasty thrash metal trinity – Nemesis, Punisher and Silent Death.

A few years later, Infectious Maggots, The Pilgrims, Carburetor Dung and Naked Butterfly, undoubtedly the most diverse and influential quartet of Malaysian bands of any era, joined the thrash metal fray, coloured up the scene with other genres (punk, grindcore and funk-metal) and set the early 1990s underground boom that invaded every dingy, rackety club and roach-infested concert hall across the Klang Valley and beyond.

The weekend metal mobs and underground day-trippers at the Klang Bus Station in the capital were a familiar sight then – everybody heading to a destination where KL’s young, chaotic noise and mayhem was being unleashed.

It was heady days for those who were there from the start and many that eventually caught the word on the streets. A genuine music scene was forged and formed, and Malaysia had an exciting, pro-active underground network to command the large hordes. However, this original scene gradually buckled under the changing tides in local music (the grunge and alt-rock years) and because of the lack of documentation, these underground “war” years remained relatively obscure to a later generation.

Back to the present day, the ties that bound those original scene-makers Nemesis, Punisher, Silent Death, Carburetor Dung, The Pilgrims DC, Naked Butterfly and Infectious Maggots – remain as strong as ever and this tight underground kinship was revisited at last Sunday’s I Thrash Therefore I Am! gig, organised by MuzikBox, at the Chin Woo Stadium in Kuala Lumpur.

As far as gig reviews go, this line-up of pioneering bands, possibly Malaysia’s Magnificent Seven, clearly do not have anything more to prove in terms of scene credentials and all that. There was hardly any “victimised” baggage left on them as each outfit enjoyed the rock’n’ roll attention, played with hearts on their sleeves and cut loose on stage with enthusiasm and verve.

Arguably these were some popular names of the day that many felt never managed to achieve their full potential – but for the bands and the crowd at Chin Woo, the ghosts of the underground past were ready to be buried.

From the shred-n-rule show-openers Silent Death to the smouldering metal finale from Punisher right to the middle section of raw meat punk from Carburetor Dung and The Pilgrims DC, each band on Sunday’s bill spat more gutsy attitude and bundled more youthful energy than many of the more conventional local rock divas and grunge-chumps of today.

The pride in the music has not dimmed a single bit through the years as Silent Death’s frontman Az, after a blistering set of classics, made sure that the rock hacks backstage jotted down the right album titles and got the set order correct for publication. To think that Silent Death’s Before the Sunrise album and Break the Silence EP have been out-of-print for years and here was a veteran musician fussing over the fine details you just had to give this bloke a hug for his unyielding tenacity.

For many, the atmosphere of the gig was closer to a family day out. Band members, most pushing the wrong end of the 30s/early 40s age bracket, came complete with family huddles backstage and photo snaps.

Even the water-break intervals were a common routine. But punk never dies, as the saying goes.

Cynics sniping for a reason to undermine this gig as a mere exercise in nostalgia had best bite their tongue. The Pilgrims D.C. and Carburetor Dung, if there was any doubt in the first place, were worthy of every punk rock (‘n’ roll) consideration, and both outfits delivered hard-as-nails sets to shatter and go beyond expectations. The Pilgrims D.C., with frontman Bob and guitarist Kombat back in the saddle, rode the frenzied crowd adulation. After unleashing local punk classics Sua Sue Good Morning, Perfume Garden, This Screaming and Air Pasang Pagi, you could bet that there was murder on the mosh-pit floor. 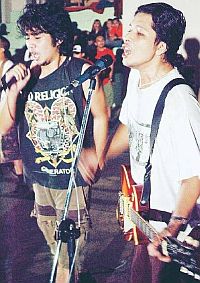 The 23-year-old Alak has also injected new bite into the Dung, and it’s great to have a young punk bred on MC5 than today’s whiny, male-centric emo-rubbish. His livewire stage antics during Happy and Oppression clearly offset the visceral riffing by Joe Kidd, now nearly teetering on the edge of breaking down in a very post punk Crazy Horse Frank (Poncho) Sampedro fashion.

Sandwiched between both punk acts was Nemesis fronted by metal-head Aru. Despite his diminutive stature, Aru is a menacing frontman and Nemesis stuck to their forte extreme covers of heavy metal classics.

“We play covers – who gives a sh**!” Aru exclaimed, before launching head-long into the Metallica overload (For Whom the Bell Tolls, Creeping Death, etc) that necessarily got the 1980s metal crowd from Seremban to Alor Star pumped up in the hall.

“Thrash never dies,” he wryly added, after being mobbed by fans, mostly in Slayer and Sepultura T-shirts, at the venue afterwards. It was obvious the masses had missed a good thrash-metal rock-out and this was a rare scorch-fest to savour.

As early evening approached, a prayer break for Muslim rockers ensued – not uncommon in Malaysian underground circles as the hall dispersed for some spiritual nourishment before returning refreshed for a double shot of funk-metal and grindcore.

Naked Butterfly were the ones to turn to for stadium-bustin’ sets. These funk-metal trail-blazers, led by frontman Adrin and guitarist Oz were the toast of the scene in 1995 and how they have been sorely missed. This reunion set, though short and without the mike-chord strangulation routine, was delivered with electrifying zest and Adrin was all over the shop as he tore into Butterfly originals Victim of the Situation and Tone Sheet, before flooring the crowd with Faith No More’s Epic at the last.

The Butterfly boys, like the old days, had the crowd roaring for an encore but more sinister clouds were looming ahead.

Of all the first generation underground acts, the Infectious Maggots was a seriously messed up grindcore band. Infectious Maggots, as the band name suggests, is a warped slab of grindcore, Goth and black noise, all rolled up into a metal meltdown.

So picture if you will Maggots’s vocalist Fathul dressed in a Hawaiian shirt and looking like a grindcore Brian Wilson on stage last Sunday it was a bizarre and ironic sight considering the man’s mental health history. But like a true vamp, Fathul came through.

It was also the Maggots’s first gig together in 12 years and their sizzling set, despite a few nerves, proved that the raspy-voiced Fathul could command a crowd. Once out of the lair, the Maggots, with practically no discernable lyrics, were untouchable.

Heavy metal outfit Punisher had the job of sending the crowd home with a bloodied smile, and that they did reasonably well. It wasn’t the sharpest of sets from frontman Rosdan and mates, but these dudes had unfailing “metal soul” that you cannot undermine.

The arrival of Butterfly’s Adrin and Oz on stage with Punisher late on was a nice touch as both bands rammed down Black Sabbath’s War Pigs and signed off the feel-good, all-embracing gig on an exhaustive high. Cue: Hugs all around.

Nobody from the 1,500-odd crowd was out to complain much. If you had to look for a reason that matters this gig showed how a scene with deep roots never fades away. Very simply, it also restored the fun element long lost and addressed the fact that this Magnificent Seven from the original underground cannot be written off … even if some of them were panting and playing at half the speed.

2. Carburetor Dung’s frontman Alak (left) and guitarist Joe Kidd charging down a fiery blast of agit-punk tunes at the I Thrash Therefore I Am! gig at Chin Woo Stadium last Sunday.