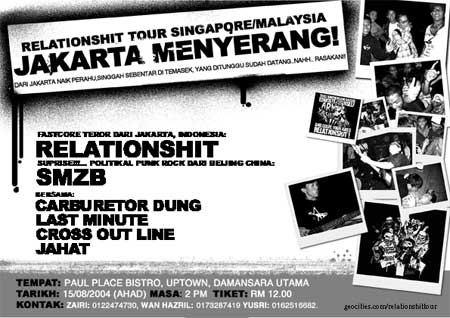 a short review by Joe:

a good show. not that many people but still rocking. One band didn’t turn up, not sure which, maybe Cross Out Line? Suara Anak Muda played, I think. China’s SMZB didn’t play as they were stopped at the Thai/Malaysian border.

Apparently people from the PRC have to travel by air if they want to enter Malaysia! That’s news to me. Last Minute played a great set, very much in the old-school vein, rocked hard. Jakarta’s Relationshit also played a nice set, but they always have this lengthy pause in-between songs. that’s frustrating when their songs are shorter than the pauses!

Best band of the day? Of course, Fast Game. The small venue really fits the band. They opened with DRI’s I Win You Lose! Great. Us? I broke a string again when we played. Typical. Kudos to Akhdan and gang for the show and big up to Paul for his patience at kids murdering his drum-set!

BTW, there was this drunken middle-aged fella who was threatening Paul (Paul’s Place owner) when I stepped in the venue. According to Paul, the guy asked for a thousand bucks or he will call the police. After a while he lowered it to RM 500. Paul told him to just call the police.

The man dialled his mobile and called the police. I heard him on the phone:“Saya mahu tindakan diambil dalam masa 20 minit.” Must have a been a bluff or maybe the police was just humouring him because the police didn’t turn up at all. But it was a scare, some DIY tables packed up for a bit. later I heard, the guy has been threatening Paul several times already. Pretty fucked up guy.

“Oh man, yesterday’s show was killer. Seeing all these fast as fuck bands (with the exception of Carburetor Dung which sounded more and more like a pissed off Black Flag these days) after all these while really put you on a high note.”