time and ticket: 2PM till 10pm, RM20
venue: Chin Woo Stadium, jalan Hang jebat, across the road from the Malaysian Basketball Association (MABA) and very near to Stadium Negara in KL

review of the show: 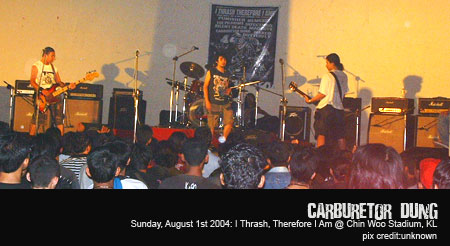 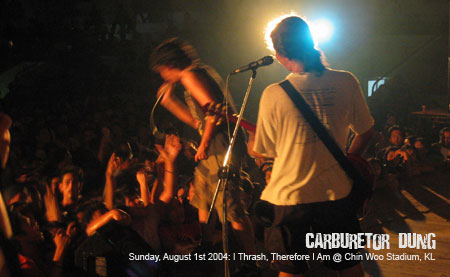 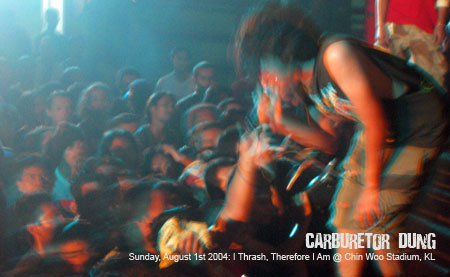 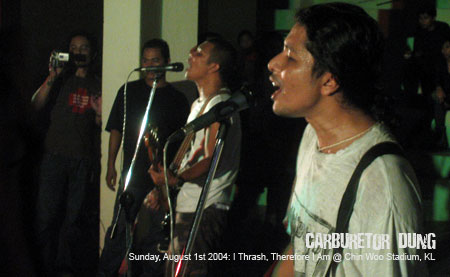 post-note: excellent show. I remember writing a review somewhere, but not sure where I put it. Anyway, about 1,000 kids turned up but the organiser MuzikBox lost quite a sum when a bunch of morons in uniforms came and extorted their part for the show to go on. Kudos to Fadhil the organiser who said, “It’s okay though, I had fun!”.

I met a lot of old friends there, from the early days of the scene that is but I missed seeing Toyol (ex-Nemesis bassist) who came but left early. One notable appearance, Abang (Hijrah/The Pilgrims’ original drummer)! he looked healthy.

I got tonnes of pictures and may put it up here soon, also me and fendi took a lot of videos but never had the chance to watch them yet.

anyway, thanks to all who were there and sang along. it’s been a while since we played to 1,000 kids!!

BTW; the annuncement of this show, with us in it caused a great deal of distress to some kids who thought that we were selling out by playing a stadium with RM20 per ticket! Tell you the truth, that was the most “expensive” show we’ve ever done since day one! What people don’t know is that we told the organiser that we would pull out if the show was going to be sponsored, and at the time the “rock” magazine ROTTW was trying to wiggle in a deal. It didn’t happen and we played. Actually, it’s priceless really. A whole day sharing the stage with old friends from 1988! I wouldn’t give that a miss. And tell you the truth, we’ll do that allover again, anytime.

MusixBox Production has now confirmed a long-talked about show comprising of bands from the early days of the Malaysian underground coming together on one stage one day and celebrate the history and the spirit of the scene. Some of these bands have already been consigned to the annals of “legends” but as you may have known, once a mat rock, forever a mat rock!

SILENT DEATH – yeah, the pioneering total death metal band from the late 80s; among the first after RATOR to put out a demo recording and also well-known to have started life as BACTERIA. It’s pretty tragic that this reunion will NOT feature the well-loved and crazy frontmen (vocalist/guitarist Stone and guitarist Pink) as both of them are now serving time in a government rehab somewhere but we will have several familiar faces from the band’s many line-ups reforming. They are As, Joe Slaughter and Dol along with with a guest drummer.

NAKED BUTTERFLY – They may have not been around back in 1988 but Naked Butterfly was a band risen like a phoenix from that particular heady era with Oz (ex-Assault), Boy (ex-Punisher) and Che Mat (ex-Silent Death/early-Carburetor Dung). They were our own version of thrash metal crossover funk kids, a bit like a collision between Faith No More and Death Angel. The band put out an album in 1995 and toured the north and KL before splitting up. This reunion will see original members Oz – guitar, Boy – guitar, Adrin – vocals and Che Mat – drums together again, along with a guest bassist.

INFECTIOUS MAGGOTS – Woo hoooh! The original inventive and very much awesome grindcore crossover band of legends! When they put out their debut album back in 1993, it was a milestone for the scene. For once a band that strived to be their own, mixing gothic influences and also elektronics with their brand of gutteral, belly-scraping grindcore. Even Fear Factory was not even heard of at the time! True pioneers and they are back with original members; Fathul – growls, Bear – drums, Bai – drums and also Abang – bass. Abang is actually a member of the second reincarnation of Maggots which recorded the thrid album “Unknown”.

THE PILGRIMS – Well, they may not “thrash” but the band is synonymous with the history of early Malaysian underground when they started as Hijrah back in 1987. At the moment it is not known whether original vocalist Lee will be able to fly back from Australia for the show and the same with the original drummer and bassist (brothers Hili & Abang who now live in Kuantan) but according to them the line-up which has recorded numerous albums for PonyCanyon will reform after a few years of limbo, featuring original member since Hijrah, Combat on guitar along with Bob – vocals, (Current Relationsheep member) Ami – bass and a drummer yet unannounced.

CARBURETOR DUNG – yes, it may seems to be a bit weird for us to be playing with all these “big” bands but we are from the same school, the same days hanging out at Central Market every single night from 1988 onwards! So this is like a chance in a lifetime for us to play with these “legends” as when we were formed in 1991, both Nemesis and Punisher were already “history”! At the moment we are planning to call upon all our ex-members and current members too, so this means we will see original line-up of me – guitar, Fendi – bass, Shahlan – vocals, Bear – drums and also Ollie – drums; along with new members Alak – vocals and Mahfuz – drums. We do hope and pray that our last vocalist Lee and guitarist Shahpari can come back from Adelaide, Australia for the gig. If all this happen then we will play selected tracks from all main three different line-ups!

This is gonna be a special show where bands from the late 80s and early 90s reforming and coming together for a show! It’s going to be a blast, and the current line-up plan to have as many old Dung band members as we can on stage, playing tunes from the early days and also new ones. So far ex-drummers Ollie and Lan Bear will join us.

Our first proper singer (on the Songs for Friends album) will NOT be able to make it as he got a family wedding that very day. BUMMER. But we are still hoping for Lee (singer on Allure of Manure) and Pari (lead guitarist on Song for Friends) to come back from Adelaide, Australia for the show. Fingers crossed.

Okay, people. Written down there is a list of recent changes to the band members line-ups.

SILENT DEATH: It’s confirmed that they will play as a trio unless 2nd-generation Silent Death bassist Dol would rejoin the band. At the moment, they are: As – bass + vocals, Joe Slaughter – guitar & Sham – drums.

NAKED BUTTERFLY: Appearing with all original members as they have just managed to get original bassist Maman back in the fold. So the line-up: Oz – guitar, Adrin – vocals, Boy – guitar, Maman – bass & Chik Mat – drums.

THE PILGRIMS: Still the same as before; most of the 2nd generation The Pilgrims; Bob – vocals, Combat (K-Bat!) – guitar, Ami – bass & guest drummer, Ekay. They will be playing songs from the first three albums, Perfume Garden, Away from the Numbers and Da Capo (the first album on PonyCanyon and also the first album for the second generation line-up).

CARBURETOR DUNG: Okay, the line-up is basically the current line-up. That is originals Joe and Fendi with latest members, Alak – vocals and Mahfuz @ Apuk – drums. It’s pretty late to call upon our exs but we’ll try to have ex-drummers Ollie and Lan Bear on a few old songs. Lee and Shahpari @ Pari are both in Adelaide and they are not coming back. Our first vocalist Shahlan has a wedding to attend (his brother-in-law’s) so he can’t make it.

Currently we are rehearsing about 18 songs, a mixture of new, still unrecorded stuff and songs from the two releases we had.