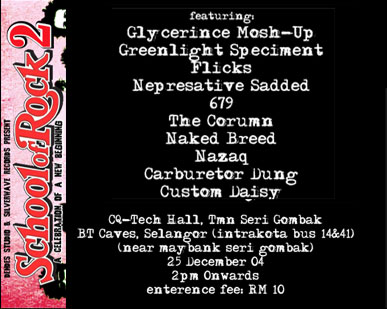 note: this gig sparked a lot of discussions on ricecooker since one of the bands playing was Naked Breed, apparently a “big band” and “not DIY”. Supposedly Carburetor Dung sold out because we are playing this show! 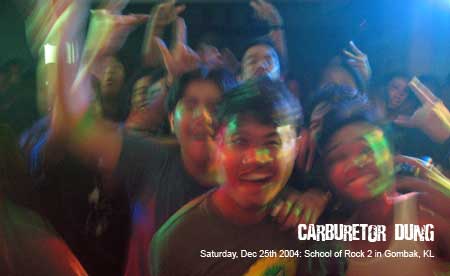 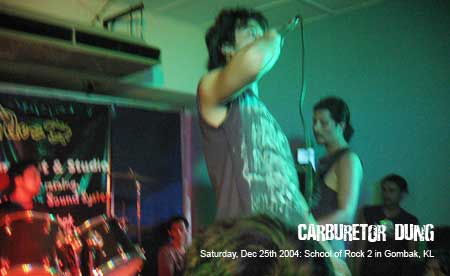 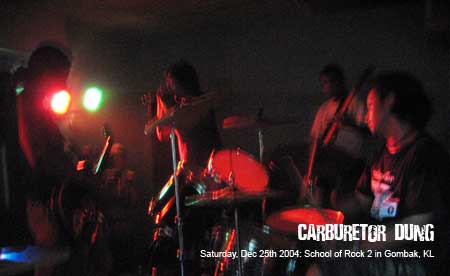 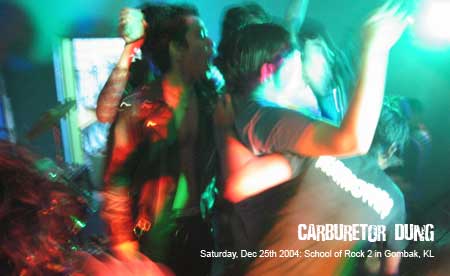 all pixs taken by Jay (Freelove) & maybe Hana (Lucy in the Loo), but I’m not sure!

A simple review by Joe, also addressing the “holier than thou” viewpoints of some DIY detractors:

It was held on the top floor of this four-storey shop building. The “hall” is actually a classroom. Maybe it’s called as a “hall” because it was the biggest classroom. It’s smaller than Paul’s Place. Anyway, it’s one of the many classrooms of this private college called “Institut CQ-Tec”. The equipment is very basic, rented by the 17-year old organiser from a jam studio nearby. The stage was made with planks and all that was put together with hammer and nails by the kids themselves. Nothing was miked apart from the vocals. And there was this cheesy strobelight in front of the stage. That’s it.

In short, it was more DIY than playing at Criiz Club or Paul’s Place. It’s a bloody classroom not a club. It was done by one lil kid who have more spirit than thousands of us out there. He lost RM500 but gave us RM30 anyway. He also spent money getting all the bands nasi ayam and prepared for every one of the band members a small bottle of mineral water. He’s cool.

Were there ROTTW at the gig? I don’t know but I didn’t see anyone with any professional camera nor Abang Rom. A ROTTW gig would be at a big place with all the grand equipment from ROM and massive stage to . Now, you tell me what the fuck is wrong with the gig? It’s RM10 & no sponsors.

If there’s a flaw, it will be the inclusion of one single band. Naked Breed. And the DIY scene doesn’t like them because they are signed to Fat Boys Records and they appear on TV, radio and all the “mainstream media”. Is Fat Boys a major label? No. It’s an independent label that has a lot of money. As such, the DIY scene doesn’t like labels with big money and I must admit, being on the same bill with a Fat Boys Records artist is pretty lame BUT there were 9 other bands there that’s not under Jason Lo’s pay. And most of them were very young kids looking out to have fun playing in a band making their own music and say what they wanna say. Just like all of you DIY bands out there.

Now, you tell me what’s wrong with that?