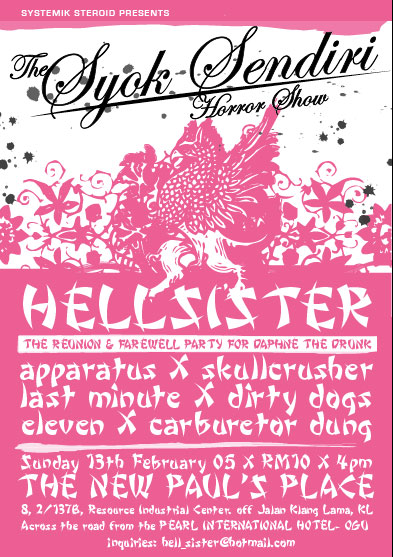 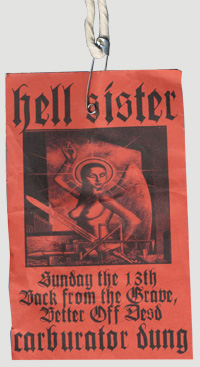 HellSister reunion show + a big send-off & farewell party for HellSister & Apparatus’ Daphne who is going back to Sarawak to carry on with her studies. Sob… A very last minute show this one but it is pretty important if you know Daphne & Reena of HellSister. This could be the end of an era.

A short review by Joe:

just got back from the show. The night ended with members of Dirty Dawgs jamming with Paul (he’s the “Paul” in “Paul’s Place” lah), playing classics from Rainbow to Deep Purple etc.

Anyway, I was late but managed to see Apparatus playing their last 4 or 5 songs. They’re less drunk this time but still not as fiery as the Night of Holocaust gig. After that my band played and I must say it’s not one of the best set we’ve ever played. It was more like jamming. very weak indeed.

After us, melodic old school HC gang Last Minute played another good one. Fourth time I saw them and it’s always fun. One thing though, the big-ish stage is a bit too big for the band. I like their shows at the old Paul’s Place better, more cramped, sweaty & “dangerous”.

And so that’s it. I missed all the other bands, including HellSister and Eleven, while sleeping at home thinking that the show will start late. My fault.