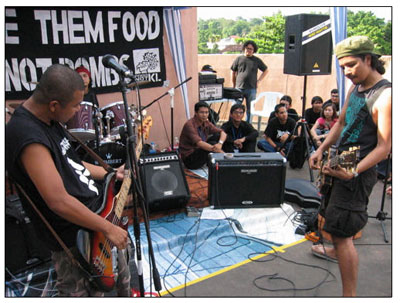 and here:
Pixs by some kids we found on the net. Thanks to the authors

It was a gig up on the roof of MalaysiaKini’s office, an open space with high concrete walls all around. Entrance is through the back of the building, in the alleyway which also serves as the back lane of the adjacent 7-11.

There are like eight flights of stairs going through four floors, so it can be quite a back-breaking trip when you’re carrying a heavy guitar. Before you reach the top, you’ll see an open door to the 3rd floor when the FNBKL kids set-up their free-food serving, campaign tables and also tables for DIY stuff and several NGOs.

There’s also a TV with videos playing. When I was at the floor checking the tables out they were showing a film on why we should stop supporting the meat industry and go vegetarian. To those interested in this topic, also check out Utusan Konsumer’s issue Jan-Feb 2005, which details battery chickens. I’m no vegetarian, but those articles managed to get me off meat for weeks, and now I’m quite vary of having chicken with my meals, preferring instead to munch on fish. Yes, I’m a bad boy when it comes to such things.

Going the stairs further, you’ll reach the top. If you stand at the door, into the opening, on the left is an area with a bit of roof, while on the right the space opened up flat with big sky and no shade at all. As I’ve heard it, there’s a company opening up a cafe on this roof and as I can see it at the shaded space (there are like cement bags and all), the renovation is under way. This is pretty sad actually as we found out after playing and seeing all these bands and people, this roof could have hosted more shows in the future. But with the cafe opening up, I’m not so sure. I do hope the cafe owner will be open to ideas. Lets see lah.

Okay, the show started pretty late from the 2 p.m. advertised. I think it was about 4 p.m. when it started. I missed the resident FNBKL didgeridoo crew which played first. I saw them during soundcheck and apparently the guys are now using a guitar pedal board for effects nowadays, that put a bit of spin on things. Pretty exciting possibilities there.

Anyway, I was downstairs hunting for lunch and a DV cassette for my video camera when my band started to set up to play. When I got up there, they were almost ready and I was halfway through my meal.

Carburetor Dung played 9 songs, all new stuff which should be recorded as soon as we’re happy with the lyrics. There were about 50 to a 75 kids sitting under the shady part of one wall when we started. Yes, it was hot. The organisers thoughtfully prepared a canopy to house the sound equipment but it’s a bit small to shade all of us playing. Not a bother though, as playing under the open sky with the sun shining right down was such a blast.

My third string broke on the second last song, tried to put it back but failed as my friend who installed the strings decided to cut off the long end bits, which is crap because when it broke, it’s too short to be reused. A waste of a still perfectly good string. If you play guitar, don’t cut off that end bits, broken strings can be re-used, over and over again as long as it’s not rusted-out. Anyway, we ended up playing the last song, Mata Buta, with no third string and it sounded awful to me.

After that we saw Pickcell playing. Yeah, this is the band which has prompted many of ricecooker’s commenters to complain on the selection of the bands playing. I don’t know much about Pickcell. People told me before the show that they play “nu-metal” and sure enough it’s the dreaded MTV-style, Linkin Park thingy with lots of jumping around and all that but without the more overt hip-hop influences lah. They were good at what they do, not that I like nu-metal much. There were two vocalists and two guitarists, so there seems to be like lots of kids in black t-shirts and jeans getting down. The audience, growing in numbers, still sat under the wall’s shade and lapped it all up with no complaint.

Next up after us was a speech by Sonya Radhawa of CIJ, telling us about CIJ, it’s mission and also the upcoming free journalism courses they are hosting (read more below). She was followed by Devil Dolls; a new UK 82-style band featuring Colleen (ex-Hell Sister) on vocals. There were four girls in the six-piece band, including a guitarist that looked exactly like Colleen’s high-heels, ripped-up and safety-pinned fishnet-stockings, severe mohawk-derived hair, dyed red and blue etc. When I was a mohawked kid back in the 1982, I have always wanted to see a local mohawked-girl punk band and so after more than 20 years, my prayers were answered only that I didn’t feel that excited as I thought I would! Heh!

Devil Dolls played UK 82 punk rock as expected, with a keyboardist to boot! It reminded me of Vice Squad when Beki Bondage went out of the band (the latterday Shot Away LP) with some Harum Scarum touches. It could have been very good but the songs were not that well developed just yet while the first three songs suffered from untuned guitars. Colleen was a very good singer though, perfect melodies and also a strong front-woman to boot. There’s no typical shy-shy-Melayu-girl mannerism with her. Even before the band started she asked the audience to stand up and they did. One little trivia: did you know that Colleen is taking up Syariah Law at the Universiti Islam? Now, that’s one factor that got me so impressed with that all-pierced up gal. Syariah Law, Universiti Islam, piercings, short-skirt, fishnet-stockings, mohawk, black’n’red’n’blue hair and more punk rock madness! go figure!

And yes, all the street-punks were there, right upfront – some mohawked, some with leather jackets and 24-eyelets Doc Marts etc. It’s a sight to see really, as you wouldn’t get these kids at the typical DIY Punk/HC show; unless The Bollocks is playing of course! They also know how to have fun, so much pogo-ing went on with hilarious spectacles unfolding. I know that many of the DIY kids hated it when these street punks turn up at gigs, I find it like a “fear of the unknown” really. As Sham 69 intoned many years ago; “they are just kids with feelings, like you or me.”

Rahmat Haron read out two poems after Devil Dolls. One the usual stream-of-recycled-sloganeering and the other, a “gagalist” anthem. There were tonnes of kids who have never seen him perform before, so it was fresh and much laughter erupted from the floor. I think the street punks have a new dreadlocked hero that day.

After Rahmat, we saw Priceless Stupid Box from Johor somewhere, a very good energetic ska-punk band, with a trombonist and also a trumpet player to boot! They rocked the roof really, much skanking went on and I loved it. They also played very well, the guitarist is waaaay better that I ever hoped to be. Their sound is not so much Operation Ivy but more Rancid with ska being the main agenda. The last songs was a cover of The Bollock’s Viva Le Punk done amazing ska-style! Excellent! Hope to see more of them soon.

Soon after, me and Fendi had to go as we wanted to go to Rimbun Dahan and check out Man’s (Shaiful Razman) first art exhibition there; so we didn’t see the rest of the show. One thing I noticed when we were down there on the streets, below the building, I can’t hear the band playing! That means, the walls enclosing the rooftop are really good sound buffers. No wonder we didn’t get any complaint from the residents around that area.

All in, kudos to FNBKL and the organisers. It’s a very well done show that’s fun to boot. I hope they made enough money for a three-wheeler’s downpayment!

Journalism training: How to write news
13 Mar 2005, Sun, 2-5pm.
CIJ
Organiser : Siew Eng
Note : Inspired by a talk, function or someone, and eager to share with others what happened? Learn how journalists do it – write a news report! Fee: RM10. Email or call to register.

Radio training: Scriptwriting
15 Mar 2005, Tue, 7-9pm.
CIJ
Organiser : Sonia Randhawa
Note : aka writing for the Theatre of the Mind. Also learn how to put in audio and visual signals and time controls in your script. Fee: RM10. Email or call to register.

this is the jam studio which (I think) provided all the PA system, amps & drums for the benefit. It’s located next door to MalaysiaKini at 50C (above the car workshop, besides the mamak restaurant)

Other entities who were exhibiting at the benefit:

Pinx Grrls Collective: Another women’s rights group but with a more young and gritty focus.

and there were more, including FNBPP etc.