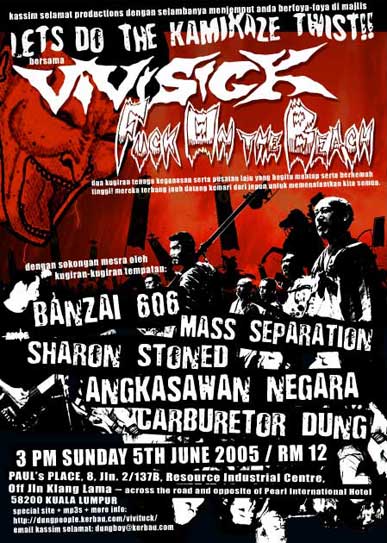 Tokyo’s most awesome fastcore & powerviolence bands, Vivisick & Fuck On The Beach, are touring the region and I’ve been involved in setting up the gig for them in KL on Sunday, 5th June 2005.

Carburetor Dung will be playing too, and our ex-vocalist Lee will be back in KL around that time, meaning that there’s a huge possibility that the old line-up featuring Lee and previous drummer Ollie appearing at the show. I’ve set-up a special site for the tour.

The special tour site features all the dates the bands are playing throughout the region, downloadable mp3s and more.

Lee didn’t show up from Australia as he said, while Ollie went down to Australia the Friday before to play with some blues oldies in a few cities there! SO yeah, no reunion as mooted.

It was a very good show though. Vivisick was awesome, while FOTB was less so but not that shabby. On the first song during Dung’s set, two strings on my guitar snapped, but FOTB’s very nice guitarist & vocalist ran on-stage and gave me his guitar for use, a fucking Flying V!!! Fuckin’ A!!