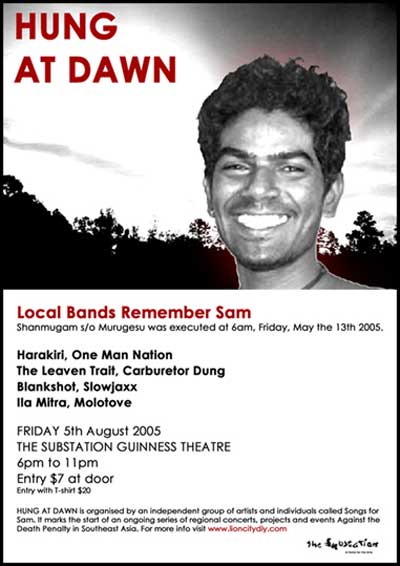 HUNG AT DAWN is organised by an independent group of sound artists and individuals called Songs for Sam. It marks the start of an ongoing series of regional concerts Against the Death Penalty in Southeast Asia.

note: The flyer above is for the first show, but the Dung cannot make it as we had problems not with our drummer’s schedule and also his lack of international passport but also Fendi being sick as a dog with some intestinal complication! Anyway, dejectedly we had to cancel the show BUT there’s actually another show the very next week, and of course, we jumped to it.

HUNG AT DAWN – GATHERING OF THE LAPTOP, THE ACOUSTICS & THE NOISE
sees another group of artists creating original works responding to death penalty.

more info on Shanmugam and the campaign against the death penalty here: Think Centre

Singapore’s President S.R. Nathan said he had decided “after due consideration of the petitions and on the advice of the Cabinet…that the sentence of death should stand”.

Singapore’s president has rejected an appeal by the teenage children of a 38-year-old man on death row, saying he would not receive clemency and underlining the country’s tough stand on drugs trafficking.

Twins Gopalan and Krishnan Murugesu, on the advice of their father’s lawyer, had handed out flyers in shopping districts seeking support for a petition against the execution, saying their father’s death would make them orphans.

Shanmugam Murugesu was convicted of trafficking about 1 kg (2.2 lb) of cannabis after his arrest at Singapore’s border with Malaysia in August 2003. He lost a high court appeal and his lawyer was seeking presidential clemency.

In a letter obtained by Reuters, Singapore’s President S.R. Nathan said he had decided “after due consideration of the petitions and on the advice of the Cabinet…that the sentence of death should stand”. The letter was dated April 22.

Singapore does not set dates for executions, although they are usually carried out on Fridays at dawn.

The case underlines Singapore’s strict enforcement of some of the world’s toughest drug laws. Anyone aged 18 or over convicted of carrying more than 500 grammes (17.6 ounces) of cannabis faces mandatory execution by hanging.

In a 2004 report, rights group Amnesty International said about 400 people have been hanged in Singapore since 1991, mostly for drug trafficking, giving the wealthy city-state of 4.2 million people possibly the highest execution rate in the world relative to its population.

Amnesty has said only six people sentenced to death in Singapore have been spared execution.

After exhausting all legal avenues, the family of Murugesu had made desperate pleas to the public to help save the man from being executed by the end of April.

This month, Shanmugam’s mother broke down at a public forum organised by rights activists and wept openly as she appealed for public help to save her son.

Singapore has staunchly defended its use of the death penalty and maintained that capital punishment has deterred major drug syndicates from establishing themselves in Singapore.

Dung note: Actually this is the first time we ever played outside of Malaysia ever! It’s pretty weird, after all these years too. We were pretty happy with this and also it’s for a good cause.

As you can see from the announcement above, we appeared on the bill with laptop artists, acoustic singer-songwriters and also experimental acts. Tell the truth, we felt a bit out of it as personally I have a lot of respect for those areas of musical genres while Dung is just a two-bit punk rock band stuck in a timewarp!

Another thing, I felt rather bad when we didn’t have much to say on the death penalty issue; first of all because of all the things already said and expressed by the other artists that night, add to the list the phamplets and posters etc. What can we add to that outpourings anyway? But we did what we can and had quite a good time doing it too. I said something along the lines that at least I haven’t heard of prison death due to police brutality in Singapore, where else over here it’s almost a monthly occurence.

The crowd was small but it’s varied; right from the artistic community to shanmugam’s family members to the several friends from the Lion DIY scene to several Special Branch officers from the local constabulary. Marcus Destructos (One man Nation) and Seelan and another friend performed quite an intense set with a laptop, masks, make-up and a hell lot of anguish.

The laptop artists were pretty good too, but I must say I don’t dig noise as much as Zai Kuning’s brilliant guitar wail (almost like Caspar Brotzmann’s Massaker but without the bass and drums). Most memorable, however, was the ‘VIP treatment” we had from Zai Kuning, Gene Sya Ruddin, Si Yun, Seelan and friends. We really felt at home. And we talked and talked till the wee morning at Zai’s house.