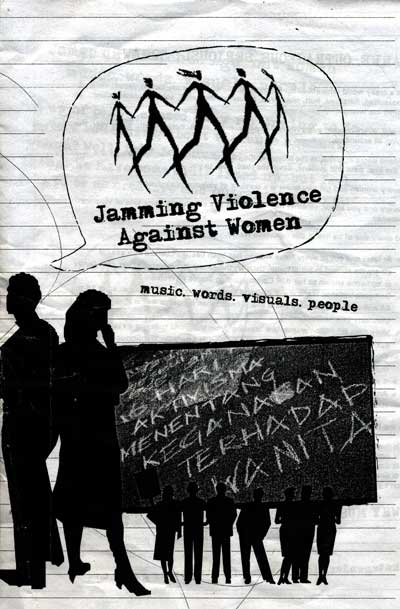 My solo (and sometimes with friends) project, Sumbang, will be performing at the 16 Days of Activism Against Violence Against Women Jam Night @ LostGenSpace on Friday 9th December.

I’m not sure whether I’ll ask friends to join in yet, but my set will feature original Sumbang tunes and also Dung and The Shitworkers songs. I’m actually very bad at playing solo! too nervous and always forgot the lyrics and chords!! but I’ll try lah…

We were there at LostGen at about 11PM due to some work I had to do. Anyway, I missed earlier sets by Rafil, Azmyl, SeiHon and all. Peter Hassan Brown & Markiza were playing when we got there. After them there was Mei Chern and some others doing poetry and stuff. There were not that many people, but those who were there were raptly into the music and whatever it was being shown. Sumbang played last. I felt much, much better than ever before. I’m shit when playing solo, always forgot the chords and the lyrics, voice goes wonky etc. But tonight it’s not as bad as I was expecting. Played Dung & Shitworkers songs, some 667 old tunes, Motorpsycho’s “The One Who Went Away” and Dolly Parton’s amazing “Jolene”. Also did “Zakiah” but Rahmat was not there, so it’s not so good lah. Thanks to Chi Too & Rafil for calling me up.

There’s another “party and performances” at the space tomorrow night and Sumbang is being invited again BUT my friend Ben and his band Etc. is playing at Sri Hartamas so I have to decline.