As far as music policy is concerned, there have been accusations that the KLPac in Sentul West in Kuala Lumpur is nothing more than a upper middle class preserve for schmaltzy musicals and sponsored piano recitals. You probably needed to own Versace stitches, and not a ratty Dinosaur Jr T-shirt to feel a sense of belonging there.

No disrespect to these high brow entertainment genres, but the nation’s fully dedicated performance arts venue did promise to make things accessible for the masses. On the agenda was a mission to adopt an inclusive outlook to embrace all kinds of Malaysian music.

To some extent, the venue did live up to its word last Saturday when it hosted the first full-scale indie rock gig indoors at the Pentas 2 hall. Organised by the Ipoh-based independent outfit BodySurf Music, the show unleashed 15 bands to coincide with the launch of the label’s Radio Malaya compilation.

If there were any doubt that about the appeal of homegrown indie rock culture, then this gig sure did the business of setting the record straight. The promotion, largely done through word-of-mouth, was enough to pack out the joint. There exists a sizeable audience from the non-mainstream, and BodySurf Music, regarded as an institution in the indie community, underlined its significance by attracting a bumper crowd of over 1,000 fans.

The main drawback was that the Pentas 2 venue was a mere experimental space and it could not cater for such a massive turnout. 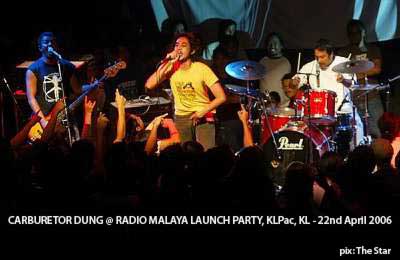 Carburetor Dung rocking the joint to the ground during the Radio Malaya launch.

Perhaps it was an oversight on the gig organisers’ part but, more pertinently, it showed that there is a hunger for live bands. With live venues nationwide subject to “death meta” raids by the authorities, the in-joke for this Radio Malaya launch was that nobody was going to spend the night in jail since the permits were approved and KLPac is a marquee venue. It wasn’t exactly a revolution on its doorsteps, but this reminded KLPac that it could benefit from an untapped youth market.

The buzz of a large crowd, looking clean cut, hip and enthusiastic at the venue was enough to offset the teething problems of the show. As early as 3pm, the hall was nearly full with 300 punters making it through the door to watch Fathullistiwa Soundscapes open proceedings. It was the enigmatic singer-songwriter Fathul backed up by full-electric outfit Coco performing perverse and twisted tunes from his album Romantikarat; and for many fans, this bloke’s appearance was worth the price of admission.

Another fresh development to the scene was the debut of Furniture’s revamped line-up. Relatively low key on the billing, this gig was an important one to Furniture as it introduced its new guitarist and drummer. Hardly tentative in the steps, the set was an urgent one and spread out with unreleased material.

As the evening wore on, more fans thronged the venue and 300 more tickets were released to accommodate the latecomers. According to the organisers, nearly 700 fans made it in.

There were, after all, some amazing bands to watch but sadly through the list, not many survived the patchy sound system. The guitar amps were hardly sufficient to rock this hall. So it was either sink or swim. But whatever the odds, there was no denying that the ska-punk monster that was Plague of Happiness kept a tight ship and came away with a winning set.

Attitudes were also good from the stage. Nobody was going to sulk when you consider how rare these events are. For instance, the busiest person on stage was Lucy in the Loo’s Hana, who led her band and also played with the Ipoh-based Free Love and power pop outfit Couple. She wasn’t particularly chuffed after each set considering the hitches. But credit to her and all the bands that carried on with the show, fighting theÂ “electricity from the microphones” and keeping the crowd going.

One of the highlights of the day was Carburetor Dung setting the joint on fire. It was a crowd frenzy to behold with a stage invasion and body-surfing rarely witnessed with bands far younger than this lot.

It wasn’t the most polished of endings when the night came to a close with a shambolic Sgt Weener Arms set at 9.30pm, but there were many positives to take home from the Radio Malaya launch at KLPac,Â the fact that there is hope for Malaysian indie rock bands, there is a great venue to adopt now and that DIY culture is far from dead.

As Carburetor Dung guitarist Joe Kidd aptly concluded, “It wasn’t a typical KLPac event, but despite the ticketing hiccups, this venue is an exciting place for gigs. Most of the bands were delightfully surprised, there was support from everywhere and that is always good news.”

â€œAlak of Carburetor Dung, which played a set of furious new(er) songs but was nice enough to oblige us with â€œBoo Hoo Clapping Song,â€ prompting a crazy singalong, lots of moshing and stage divingâ€– small review & pix by brian for Klue.