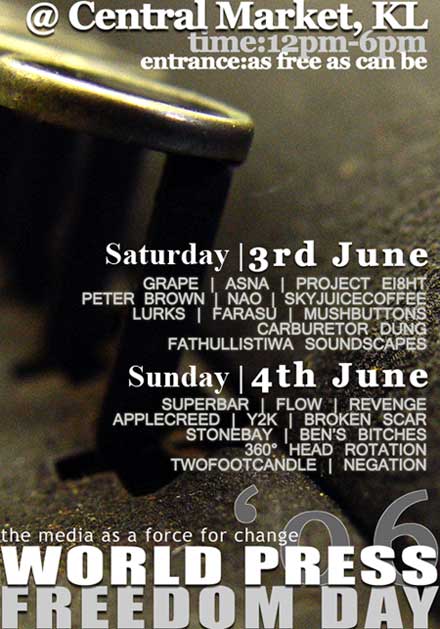 Last Wednesday was World Press Freedom Day. Celebrated every May 3 since its proclamation by the United Nations in 1993, “The Media As A Force For Change” is the theme for this year’s observation. Scanning mainstream newspapers, apart from Utusan Malaysia, not many others actually highlighted the day with much significance. I wonder why. Perhaps it is because there frankly isn’t much to celebrate.

A quick back glance raises a blush as I recall the Danish cartoons fiasco. In February alone, we witnessed the indefinite suspension of Sarawak’s oldest newspaper, Sarawak Tribune, and a two-week suspension of Berita Petang – another newspaper in Sarawak – as well as Guang Ming Daily for publishing news with the cartoons in one form or another. New Straits Times had to publish a front page apology for publishing a cartoon strip that alluded to the Danish cartoon (twice, mind you) to get off the hook; an action that incidentally did not help China Press, since it had to sack two senior editors as well as publish a front page apology to avoid suspension on reportage of the nude squats incident.

Meanwhile, newspapers like Harian Metro are having a field day, exercising complete “freedom” without any reprise, often working in collusion with enforcement agencies.

Accompanying police officers to raids, publishing reports about non-existent goats in alleged “black metal” concerts and conducting interviews with young people while they were under police detention are just some of the gems of their record of ethical journalism. Similarly. Utusan Malaysia takes investigative journalism one step stranger by creating “exposes on gay spas and saunas”, spurring a series of raids by the police targeting allegedly “gay” venues.

The internet on the other hand, has been loudly hailed as being free from any form of censorship.

Bloggers and community forums are blooming like mushrooms after a much awaited spell of rain in attempts to quench the nation’s thirst for information that is not circumscribed by political parties’ associated ownership. But the freedom here is also, sadly, somewhat artificial.

There are a plethora of other laws that can be used to gag and silence, such as the omnipotent Sedition Act, Official Secrets Act and of course, the infamous Internal Security Act. All of which work effectively to create an environment of selfcensorship that works better than any actual application of laws.

As though that is not enough, filtering software is being unabashedly done in schools and government departments, apparently to block out pornographic sites.

It is a well-known fact (amongst those who work in the field of information and women’s rights, that is) that filtering software does not effectively curb the consumption of pornography. In practice, it has blocked out information related to sexual health and feminist sites. Which begs the question, what is it about this digital space for information exchange and expression that needs to be blacked out, and more offensively, in the name of “protecting young people and women”?

We painfully need something to celebrate about. At least I do. It is not appropriate to congratulate ourselves for rating 113 in the Reporters Sans Frontiers worldwide press freedom index. So we rate a little better than the Philippines (at 139, one notch higher than Singapore), but they have the mixed infamy of journalists being gunned down for dissident reporting.

Do we really need to start documenting the number of news disseminators being murdered before we acknowledge that we pressed are indeed,freedoms for the of information and expression?

I have not even begun articulating the gendered dimension of this need for an environment to have knowledge, opine and share with lived and genuine liberty.

Suffice for now, slap on the yellow ribbon and keep the critical faculties alert for the creation of spaces that enable a real transformation of the way we acquire, exchange and create information in this country.

Start by signing the petition calling for a Freedom of Information Act!

The writer is a feminist activist who spends all her time reading, writing, organising, thinking, doodling and dreaming about change.