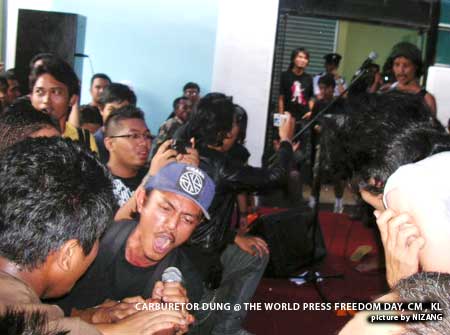 We had a good time playing at the WPFD at Central Market. The first time we have ever played at CM too. Me, Fendi and our new drummer Bullet are all regular lepakers at the Central Market back in the late 80s and early 90s. The band was basically formed there! There’s so much memories and it would be too sentimental for me to write all of that and bore you people.

Anyway, we played last that day. Fathullistiwa Soundscapes had to play early and so they shuffled the line-up around. We jammed 8 songs to prepare ourselves, but as usual we fucked up a few songs when we played ’em, especially Our Voice/The Flag, when I lost the plot altogether around the mid-part. We also played Labour of Hate as the sole “encore”. Don’t think we ever tried that tune with Bullet ever but he played along. 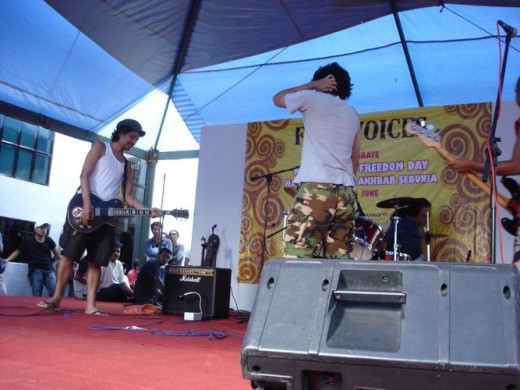 pix by Haqim Zolkefli from his page: http://dangkarma.fotopages.com 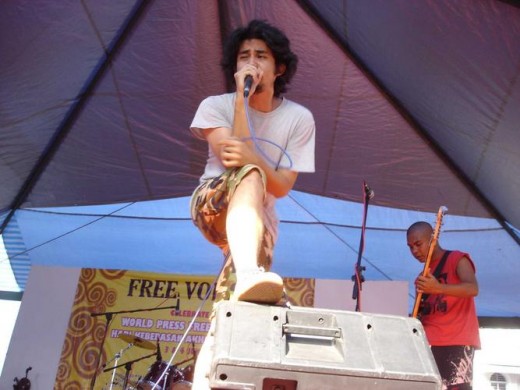 pix by Haqim Zolkefli from his page: http://dangkarma.fotopages.com

I was happy with my guitar too. It was humming excruciatingly when we played last and also when we were jamming. So on Friday I decided to hunt for a contact cleaner to clear up the oxide on the internal wiring, which I suspected was the main culprit. It took about four hours walking around Low Yatt, Bukit Bintang, Time Square and finally I found it at a back street in Jalan Pasar in Pudu. Yup! I walked there and back under super-hot sun, but it was well worth the trouble though.

Once back home I took off the guitar’s innard-covers, sprayed the contact cleaner allover the wirings, left it under the fans for a few hours and voila! No more hums! So if you have the same problem with your guitar do go and buy a contact cleaner spray and zap it all off. The brand I bought is Kontakt 60, go here for details. It was RM9 at the shop.

It was also a very hot day on Saturday. Midway through our set I was gasping for moisture. Always good for a punk rock show though!

Met a lot of good friends there. Must thank Singapore’s Esam & galfriend, Mubarak (an old face which we haven’t seen for years), Rudi Brayok and friends who came all the way from Ipoh, Adi from Sandakan, Kid & Niesa, Syed & Haanim, and many more including those who would be too cool to be mentioned here. Thanks for coming guys!

There’s a report at ricecooker: here

Yuen took a video of the whole set, while Hakim did the same with a hi-quality HD camera. Have to find time and edit all that that.