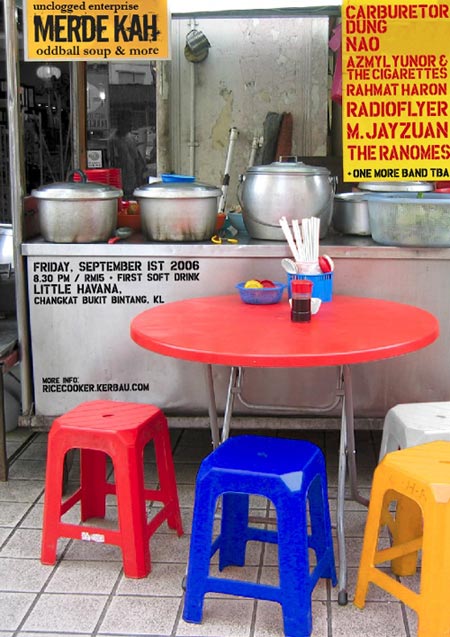 AZMYL YUNOR & THE CIGARETTES
I have been waiting for this really. Azmyl Yunor’s “no depression-ish” alt-country with a full band! Yeah. Americana meets Malaysiana, so expect a lot of drawling Koboi Klang shoot-outs!

DESERTERS
The current indie rock darlings; busy with tonnes of gigs and even a stint supporting New Yorkers We Are Scientists recently. May get too big for Unclogged very soon, so do catch ’em before they go supernova.

NOTE: Deserters pulled out. Apparently frontman Zack had been overseas and just go back with a sore throat and all. The confirmation was pretty last minute anyway, so everything’s is not working for them to be able to play.

RADIOFLYER
Replacing Deserters, RADIOFLYER may not be familiar to many but the band has been in existence under several different guises and names eversince getting together in 1994! The Klang-based band has appeared in a few gigs around KL, including the recent Outta Dis Rock Shall Come A Greener Riddim @ KLPac. They came highly recommended by Bob Pilgrims who saw them at the gig and told me about them a few days later. Their tune, Murder of Richard III, featured on the band’s MySpace page, reminds me of The Cult during the Love album era, where stinging hardrock meets psychedelia while the other tunes features distinct Richard Ascroft influences.

NAO
Most interesting shouty post-punk band around. They even looked like young angry postmen. Expect a lot of telling off, so do slap yourself a few times before entering their loud-hailer range.

M. JAYZUAN
Recent convert to the deadly disease of “entrepreneurism” and now owner of a hip indie-rock store up there in Ipoh. Usually seen bopping on stage with Free Love. Also known as an indie-rock slut, so offer him a spot in your band and blag a pair of shoes off the man.

THE RANOMES
I haven’t seen them yet but I’ve heard enough to not miss ’em ever again. Prime time the-first-three-albums-era The Ramones reborn somewhere in the back-streets of Bukit Bintang. Expect a lot of 1,2,3,4!

BITTERSWEET
Anglophilic Brit-popper of much swagger and style. They wear shades at nights, so always keep a look out when you’re walking. With Bittersweet, you can imagine a world where the early 90s is on perpetual repeat! Yeah!

NOTE: Bittersweet also can’t make it but they will be aiming for the next one.

do come & join the fun. lots of homemade recordings & merchandise will be on-sale too. IF YOU ARE COMING, DO SPEND THE WHOLE WEEK WITH THE RAMONES SONGBOOK, COZ WE GONNA SINGALONG WHEN THE RANOMES CLOSES THE SHOW!