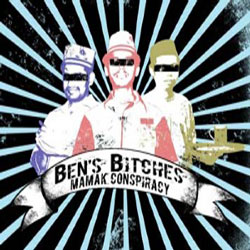 Local indie-rock/pop-punk “rude boys” Ben’s Bitches is gearing up to release their 3rd album Mamak Conspiracy and one of the songs is a cover of Carburetor Dung’s Happy, the original track of which featured on our The Allure of Manure mini-album and Dari Jemapoh Ke Manchestee soundtrack album.

Ben’s Bitches, of course, have our blessings! We always have a soft spot for these naughty fellows. The band’s version is actually mellowed further than our already dinky versions and it’s pretty charming, reminding me of Singapore’s The Oddfellows at their height back in the early 90s.

The Subang Jaya-based band is pretty well-known as a comedic trio who thrives on being heckled or being the heckler at gigs. If i’m not mistaken the current drummer is still Azmyl Yunor but it’s highly likely that there’s a fourth member lurking in there. The new album features a whooping 18 songs.

The release date is still vague but it should be out in February 2007. A special launch party is now being arranged. We’ll keep you people posted.

more about the band: