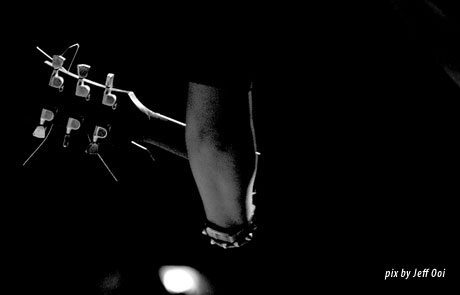 First of all, much thanks and big love for the CIJ gang and Sei Hon (Troubadours KL) for the show. We had massive fun that night, and we could have gone on for a few more songs if the bass drum was not tuned so low (more on that later).

There was a sizable crowd, with good friends right at the stage front, but not as many as last year though. This could be because there were 3 other gigs going on the same night all around KL and also the timing. 10pm is a bit too late for our Mat Rempit friends who need to wreck havoc on some highways somewhere. A large section of the people decided to stand far into the night instead of the stage front and that dampened the spirit a bit.

The highly enthusiastic (and drunken) Indonesian workers who went wild last year were also absent, or maybe because of our style of music (if you can call it that) is out of favour with the kids who prefer muted post-rock rather than well-worn punk rock agit-prop! 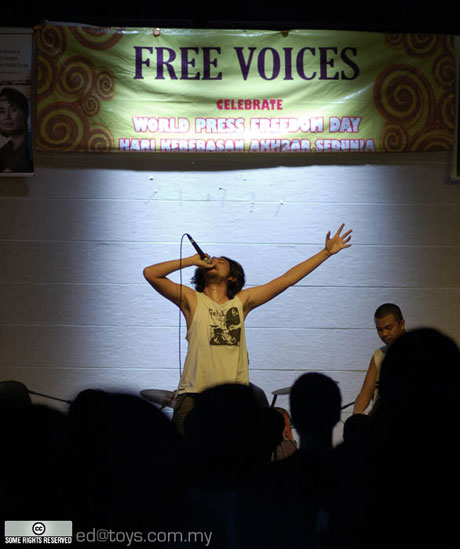 But hey! Who cares? It was fun, and I think we haven’t had a gig with a good sound setup for, hell!, I can’t even remember! The stage felt really alien to us though. It was way too big and I’m too old to run around berserk like Angus Young.

We had to cut out a few songs out of the set-list as our drummer was nearing his final breath. The bass drum was re-tuned after our soundcheck by Paul Millot (who was playing for Kamasutra) and it was way too low for proper punk rock kicks, so Bullet had to muster a hell lot more energy than usual to thump the hell out of it! Lesson learned: If you play after Kamasutra, retune the drums!

The bass amp was also acting up, refusing to work intermittently through out the set, this is due to the lower stacked speakers not being amped-up proper. Another lesson learned there. We also called up our good friend Batak (18SGG) to take care of the overall sound for us and it worked well. I think we will be using Batak a lot from now on, like the 5th member of the band, only out there in the soundscape department. That’s another lesson!

I-Lann took a lot of footages on DV, Fendi had one DV cam perched on his bass amp and I think CIJ had a video guy covering the show, so maybe we can put it all together one day. 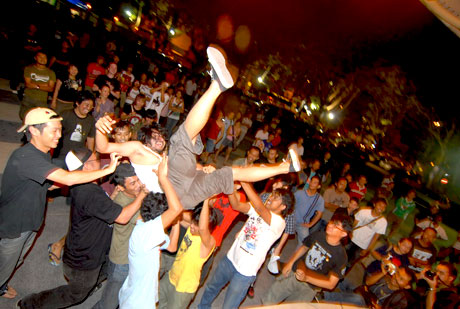 Thanks to all of you who were there. And our gratitude to Jeff Ooi (jeffooi.com) and his LensaMalaysia (lensamalaysia.com) friends who snapped a lot of great pictures.

You can check out the pixs here: LensaMalaysia: World Press Freedom Day events at Central Market, May 5-6