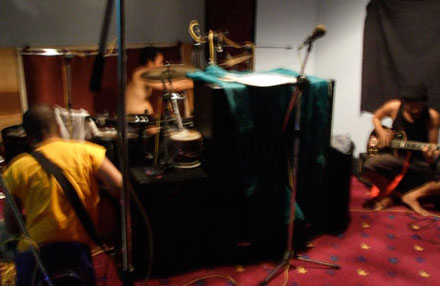 We finished recording at about midnight last night, with another 4 songs in the can. This means we have 9 songs for the next release.

1. Hanturaya Putrajaya
2. Macam Celaka
3. Fine Line of Numb
4. Aku Mau Jadi Anjing Mu (The Stooges’ I Wanna Be Your Dog hijacked with our own lyrics)

In the end we rejected 2 other songs, Malaysia Boleh (which sounded too silly and weak for us!) and a new song written earlier this year, an ode to sexist bastards; Big Dick Pig. We decided to scrap the second because we haven’t jammed it yet and it would take too much time getting familiar with it. So both are now back on the “later” box.

So when will the album be released? Well, we don’t know.

The plan is to give all the raw tracks to our good friend Lasse Bjorn (ex-Seventh Wave and The Soapflakes). Lasse, currently a member of power-pop band The Anhyzers, will mix, add some parts and also master the recordings for us when he goes home to Sweden. 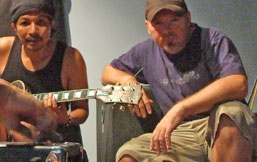 The man was in the studio with us for two days, observing the process, suggesting techniques, giving us valuable feedback and also while his time watching the TV! At the end of the day, he helped us a lot in making the sound as big and raw as possible, complimenting the work done by studio engineer Lab and Bullet (who has always been our general studio “MacGyver”). I think at the moment it sounded very good, as if we’re just jamming. Very live-sounding.

If this work turned out good, we’ll be working with Lasse a hell lot more in the future. At the moment he also has agreed to remaster our 1999 release The Allure of Manure and some extra tracks for us to reissue soon.

The whole experience of the recording was smooth though. Pretty easy-going, with lots of cigarettes and mineral water breaks. The studio can be quite hot and humid. Bullet ended up drumming in his underwear the first night and also fell asleep, snoring right through our backing vocals sessions.

There were some minor hiccups; like when the massively heavy bass amp (hauled four floors up by Fendi and Alak) and borrowed from Mamil (Phil Jones Bass M-500 & 8T cabinet) refused to take the cable jack in its input on the first night. Bullet and Fendi opened it up to find the end of a cable jack stuck in the hole! Fendi also broke the first string of the bass he’s using (borrowed from Lan Kuchalana), lucky Lab is a bass player and so he replaced the string with his.

The song Macam Celaka sounded rather too preachy, so me and Alak sat down and rewrote the whole thing. We also wrote a new set of lyrics for The Stooges cover, turning into a song about a businessman politician bribing and arse-licking his way to win favours.

The song Semua Sama Semua Bosan also featured a long guitar solo part and it took me about one and half hour to lay it down. Very badly done though and it is a weak melodic solo over an aggressive song. I hate it. I hope Lasse will scrap that part and put his own over it. I can’t solo for shit really.

So here’s what we have to offer for the next release:

The whole length is around 30 minutes.

BTW; thanks to Azmir who attended the first day of recording.