We are recording, finally! 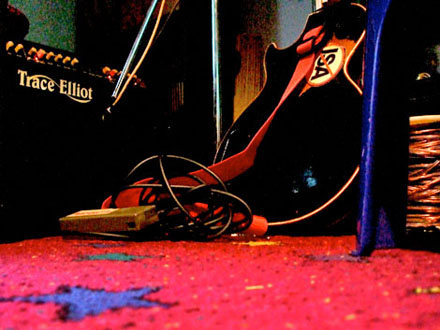 The band is currently back in the studio, and this time for a new album, finally. It’s been more than 8 years since we went into a studio and recorded our 2nd album back in late 1998!

The album is being recorded at a studio in Sri Gombak, KL and we were there yesterday (Saturday) at about 4PM. By the time we got truly knackered at 2.30AM just now, we’ve put down five songs on tape. Later today we’ll be back there to record another 5 or 6 songs (time permitting).

The studio, situated on the fourth floor of a typical shoplot-block, just across the road from the CQ-Tech Hall we played at in 2004, is run by our old friend Lab. I first met Lab back in the mid-90s as studio engineer and partner of DreamWalk Studio, then situated at Jalan Loke Yew. At the time DreamWalk’s partners include Bullet and Lab’s brother Abg. Man. Prior to that the was another DreeamWalk Studio, the first incarnation, situated in Kg. Tungku, PJ where we recorded The Pilgrims’ 2nd album “Away from the Numbers”.

Anyway, the current outfit run by Lab is still DreamWalk but its operations have been largely scaled down. The studio has been used mainly for recording vocals (as Lab told us, usually nasyid vocal groups, video voice-overs and things similar). On one corner of the studio there’s a simple video editing suite; featuring a G4 400 Mac and nothing else. Very simple.

The recording room’s space is pretty big though, we all fit in in that nicely. We setup for live recording, everything and everyone plonked in the room, including Alak with his mike, me and my guitar and amp, Fendi with his bass and Bullet with his drums. We get our sound, both in the studio and on the mixing board and whack through songs. Just like that. Very raw. It’s like a dream really, I’ve been dreaming of recording live like this for years and finally we are doing it!

I also fell inlove with the guitar amp, a Trace Elliot Super Tramp Twin which fits my Les Paul Custom like a glove. Never had a better amp than that. The setup is just straight cable in and whack the gain. There’s two gain knobs too! Brilliant. Can’t wait to get more of that today.