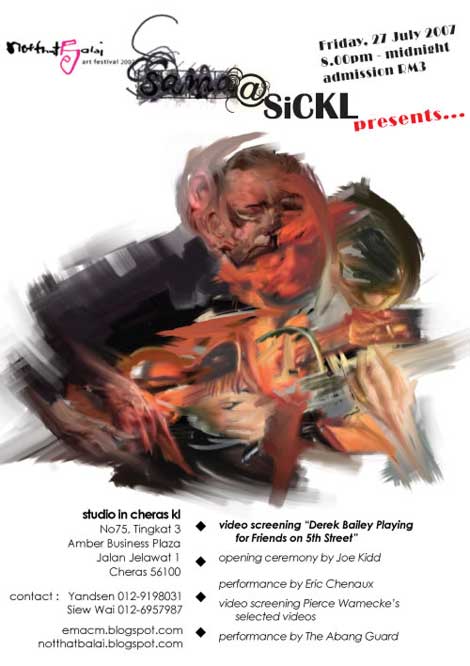 I was invited by the organisers of NotThatBalai Festival to “officiate” the opening of the Studio in Cheras’s part of the happenings and someone mentioned about Abang Guard performing for the night. So a few days earlier I called up Bullet about it, he said yes. Told Zai very late, but he cannot make it.

But we turned up there anyway and played with Yandsen on the saxaphone. Again some people really liked it but the some complained that Yandsen’s saxaphone was too loud. We also met one interesting character, Polly – original 70s punk rocker now living in Karala, India. She was being the punk rock heckler of the night making fun of Derek Baily’s “incompetence” when we were watching the film, and also me trying to be funny opening up the show by slicing 4 durians and pass them to the very small audience.

The Abang Guard played along to a video projected to the wall. I don’t know whose video it was but it was animated sepia-toned patterns and clouds-like stuff. I think we played well by the later part of the performance, where the beginning was a bit too all over the place.

Thanks to Aziz Ciplak for the bass guitar I borrowed for the night.