We had a great time playing at the WWF’s Art For Nature 2008 Fund Raising which took place at the unlikely venue (for punk rock); the spread-mungous Rimbun Dahan estate in Kuang, Selangor last night.

The show took place at the ground floor of one of the houses there. The space looks out into the open, surrounded by man-made water catchment with the audience sitting pretty far out on the landings and stairs.

The night started with tonnes of food, drinks and good company. At around 10pm, Gasoline Grenade started the show, followed with Alak and Ikin’s acoustic trio The Pip (with Farhana on vocals). After which we played, ending with a jam with our favourite skronk-people; Ah Tham & Yandsen – doing our Stooges version AKu Mau Jadi Anjing Mu!

Both Ah Tham & Yandsen continued on as EMACM with Azmyl Yunor on drums and Siew-Wai on pipes. The night ended with the crazy antics of Ciplak, with Aziz wading the water trying revive his fire-starter stick. Yeah, he was spitting fire all over the place.

Here are some pictures taken by Farhana: 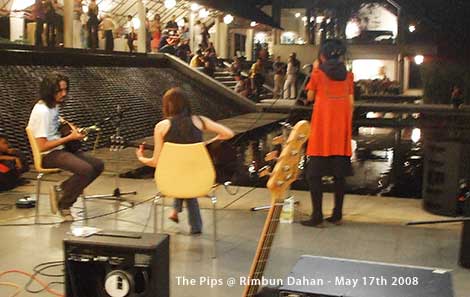