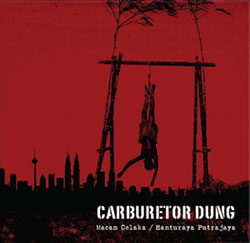 Eversince we came back from the Java Tua last year (May), We have been selling a home-made CD-R EP called Macam Celaka / Hanturaya Putrajaya.

This release was never announced on our mailing list, myspace, ricecooker or even here! Why? I guess we never bothered to make a big fuss out of it. After all, it’s just a stop-gap release, something to sell at the gigs we play.

The CD-R EP (it’s burned on a CD-R and features 4 songs, hence the “CD-R EP”) features two roughly-mixed songs from the “upcoming” album (Macam Celaka & Hanturaya Putrajaya) and two songs from two different compilations a few years back; Johnny (from limited The Dude Puked On My Lap compilation) and Mari Nyanyi Menjilat (from the Radio Malaya compilation).

It comes in a full-colour printed CD envelope, with a photostated A4 lyrics sheet (includes explanations on the songs) and also a black & white vinyl sticker. Sold at most of the gigs we’ve played since June 2008, it was priced at RM10 and I think about 100 copies of it are now gone, with a lot of them given away to friends near and far.

Sometimes the CD-R EP would be on the racks at The Ricecooker Shop (especially when there are leftovers from the shows we played) but at the moment it’s all gone. But if you guys and gals want it, please email the band here: therealcarburetordung at gmail. I’ll do another stack of it if there are enough orders. 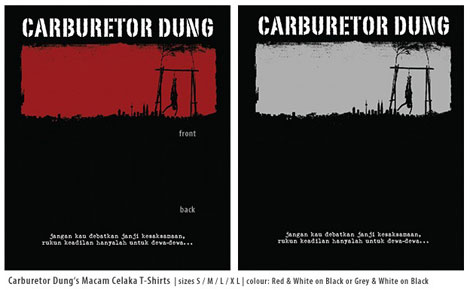 BTW: there’s also a t-shirt of the CD-R EP, and again we never announced it before.

This t-shirt has been selling at the gigs and also at The Ricecooker Shop. It features the CD-R EP’s sleeve design on the front and a line from Macam Celaka‘s lyrics at the back. This one is only available on black t-shirts with sizes ranging from S, M, L and XL. Each one is going for RM25 each. Again, if you want it, do email us, and tell us which colour you want: red background or grey background.