About one and half month ago a laughing banter among friends about forming a “real punk rock band” became quite serious when The Ricecooker Shop regular Seed (of Defeat, Skullcrusher and many old “chaos punx” bands in Penang) suggested that we should start jamming and play gigs!

So how do you kickstart to life a brand new band? Force it upon yourself. First step, find a gig to play, even when your “band” is still a “theory”. Second, make the date of the gig as near as possible, so the “band” has to become a real band quick and start jamming in haste.

And that’s precisely what Seed has done.

So yeah, say hello to The One Chord Wonders! We play covers of obscure old-school punk rock, sticking to the time period of 1975 to 1979 stuff. At the moment we will be covering The Buzzcocks, Generation X, The Professionals (Jones & Cook post-Pistols band) and Chelsea. The theme song is our namesake, One Chord Wonders by The Adverts!

We’ve been to two rehearsals, one last night and the first one a few days ago. Both at the Pertama Studio in Cheras. And TODAY is our first show! It will be a gig full of crust bands from Apparatus to HellExist and two Indonesian bands. 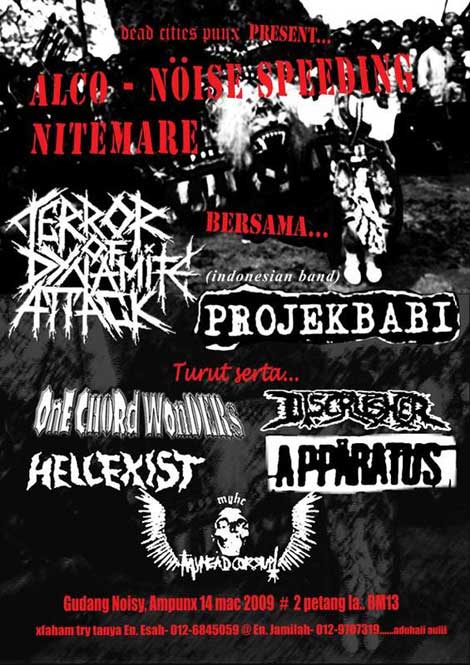 The One Chord Wonders:

Do check us out!