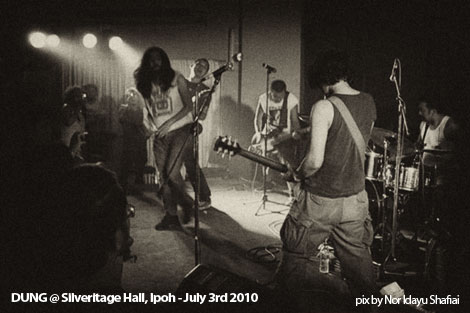 Here’s a recording of the show we did at the recent Surf’s Up gig, featuring an all old-tunes set and nothing at all from the new stuff we’ve written and recorded.

It’s totally raw and full of mistakes and the usual reckless Dung-ness! I forgot a few chords for Menjilat, Fendi sang backing vocals outta tune, Bullet lost a few beats while my guitar snapped a string right in the middle of it but we carried on. It’s all in a day’s work and a whole lotta fun!

The set itself was cut real short, down to 20 minutes because we played last in a long list of 17 bands. We started a little after 11.35 PM and the venue had to be cleared by midnight.

This was recorded using the amazing Zoom H2 digital recorder which was stationed way at the back of the hall, on top of the soundman’s mixer desk. The file was later cleaned up a bit with EQ and then mastered using T-Racks.

The sound is surprising okay (apart from the muffled atmosphere) despite the failings of the venue and PA (i.e. booming, untreated, not sound-proofed, cavernous and flimsy-walled hall usually used for weddings and seminars, abetted by a weak PA system that’s couldn’t carry vocals with much clarity nor power etc. etc.).

We’re not complaining though, it’s hard enough to find a venue for gigs in Ipoh these days, let alone having a good one that would allow for good sound. A post-gig talk we had over limau ais and coffee revealed a lot of problems when it come to finding venues in Ipoh; all the public halls usually used years ago are now off limits, unless you have a good “cable” with somebody higher up in the authorities and even then you’d never know when they gonna come down on the show and stop it.

The same goes with the nightclubs, the owners are wary of problems with having “rock” music being hosted in their spaces and now collectively stopped taking up rentals for shows. The only avenue we see there in Ipoh now is another setup like Soundmaker (Penang), Noisy (KL), Rainhouse (Taiping), and many more scattered round this side of the Peninsular – rehearsal studios, big enough to double-up as gig spaces; small gigs that is. We heard the show’s organisers and long-time friends of ours, Bodysurf Music is planning for such a place now. We surely hope it’ll work out.

Anyway, do have a listen – CLICK ON THE ARROW NEXT TO “BOX” UP THERE.