Our first show of the year. Our slot is between 5 to 7PM. Do come and support the cause!

post-show new report by The Star: 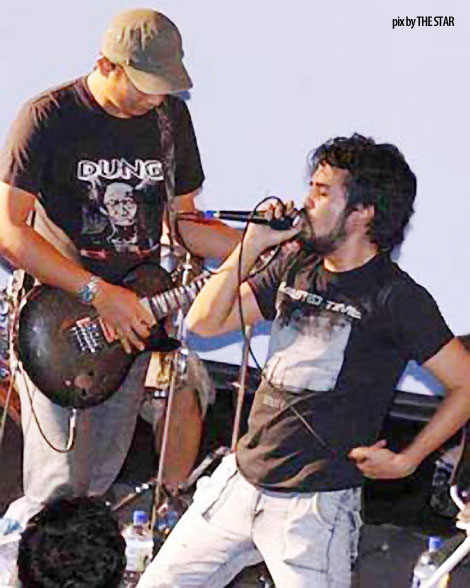 We played three songs, just like what we rehearsed. pretty run-of-the-mill, AKA the boring set. i had to use a small amp which was jacked up straight into the house system, the same with Fendi’s bass and that put a damper on things. Our set was the last part of the 2nd show. Before us we saw ThinkTadpoleThink play for a bit, went outside for a smoke, went back in to see a bit of Furniture’s set, after which they had Furious George and friends and after that, the Buka Kolektif featuring Sharon doing something with the audience.

We left as soon as we’re done; gone off to PJ for dinner before sending Fendi back. The next day I heard the show got about 2k something for the cause. Not bad!

We got at the show late, as it was pissing with rain and the roads were flooding and shit. We went to SIS Studio again to practice. The guy running it opened up the studio just for us, and that’s pretty cool. We like the space; big room, decent equipment; Fendi started using Manan’s Box of Metal pedal and Bullet brought his new snare drums; so the sound’s very good.

For the first time I brought a small tripod to record the band on the H2. Easy setup and the sound is great, better than putting the H2 on the floor as per usual.