taken from his site: http://hoflich.com

While I was in Kuala Lumpur, I met up with my friend Joe Kidd for beers. I met Joe many years ago, through the zine thing I did at the turn of the century, and we meet up when we get the opportunity. Joe is the guitarist for Carburetor Dung, a longstanding DIY punk band and one of the godfathers of the scene. Theyâ€™ve got a great website, and the band has made a compilation â€œStill Pissed Off After All These Yearsâ€ free to download (oddly enough, a band called the Kodgers have put a CD with the same name). Yes, the band is named after the famous Lester Bangs book, although I didnâ€™t clue in to this right away. Talking to Joe, I realised that I hadnâ€™t even listened to the album, even though I downloaded it many months ago, so I made a mental note to check it out as soon as I got back to Singapore (and I did). Some fanboy I amâ€¦

While I was in KL, I visited Joeâ€™s record shop Ricecooker and picked up two CDs, one by folkers the Pips, and the compilation â€œRadio Demokratikaâ€ to support political awareness about Malaysiaâ€™s constitution. Here are some reviews: 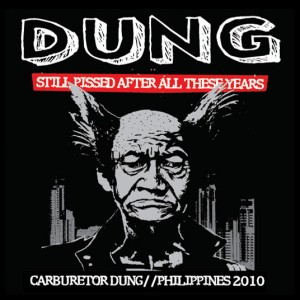 A great compilation from the band that they put together in 2010 for their tour of the Philippines, carrying them from 1992 to 2007 (but the songs appear on the album in reverse chronological order.

The band has a very heavy frantic screaming sound that, in my minds makes them more similar to Corrosion of Conformity than anyone else Iâ€™m familiar with. They play around with their sound â€“ â€œMari Mtyanyi Menjilitâ€ has some funky sax in it, and â€œJohnnyâ€ has some spoken lyrics before all of the screaming begins. Songs from â€œThe Allure of Manureâ€ are a bit more singalong, in particular â€œOur Voiceâ€, â€œThe Lineâ€ and â€œPayday.â€ Buzzing. â€œWide Awakeâ€ has a chilling intro, then gets hot, while â€œDo Nothingâ€ is a pretty anthemic tune.

â€œHappyâ€ sounds a bit thin, but â€œOppressionâ€, with its metallic opening, is good fun and buzzes along. â€œBoo Hoo Clapping Songâ€ is a scratchy, squeak anthem that is probably the bandâ€™s best-loved song, given the number of YouTube videos of it that are available. â€œDonâ€™t Knowâ€ has at the same time a surf rock riff as well as the unrelenting drive of a Suicidal Tendencies song. I like this track. â€œCarburetor Danceâ€ is similarly heavy, but the vocals are also a bit thin.

â€œSong For A Friendâ€ is short, hyper and snotty, a great little punk number full of hope and spirit. â€œLiarâ€ is melodic and snotty, and is a long, loud complaint about a liar. â€œIâ€™ve had enough of you, my friend.â€ â€œLabour of Hateâ€ is an acoustic song; acoustic songs donâ€™t seem to be Carburetor Dungâ€™s forte, but itâ€™s nice of them to include one here. It has a slow electric solo, and in some ways sounds like a Spitz song, kindaâ€¦ sortaâ€¦ â€œFarewellâ€ is a rambling rocker with a noodly, bleating guitar ramble.