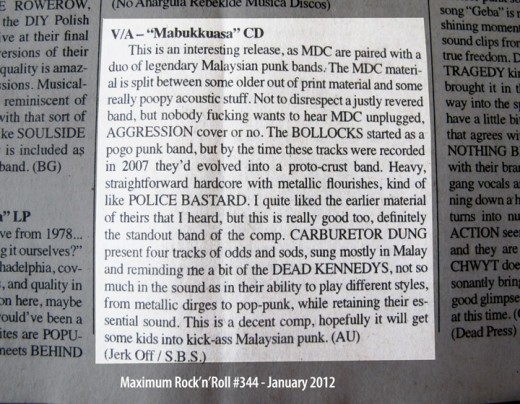 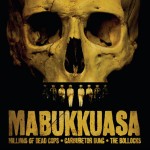 The first review of the MABUKKUASA CD featuring MDC (Millions of Dead Cops), THE BOLLOCKS (our Tom’s other band) and DUNG as appeared in Maximum RocknRoll issue #344, January 2012:

This is an interesting release, as MDC paired with a duo of legendary Malaysian punk bands. The MDC material is split between some older out of print material and some really poopy acoustic stuff. Not to direspect a justly revered band, but nobody fucking wants to hear MDC unplugged, AGRESSION cover or no.

THE BOLLOCKS started out as a pogo punk band, but by the time these tracks were recorded in 2007 they’d evolved into a proto-crust band. Heavy, straightforward hardcore with metallic flourishes, kind of like POLICE BASTARD. I quite liked the earlier material of theirs that I heard, but this is really good too, definitely the standout band of the comp.

CARBURETOR DUNG present four tracks of odds and sods, sung mostly in Malay and reminding me a bit of the DEAD KENNEDYS, not so much in the sound as in their ability to play different styles, from metallic dirges to pop-punk, while retaining their essential sound.

This is a decent comp, hopefully it will get some kids into kick-ass Malaysian punk. (AU – Andrew Underwood)

NOTE: The CDs finally arrived at our friend’s in Singapore and we will be fetching them soon.