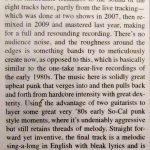 *note: we recorded the album live but in a studio, not at a show. the reviewer may have thought otherwise. anyway, it’s a good review, so no complaints!

Malaysia’s CARBURETOR DUNG has existed since the early 1990s, releasing two cassette albums, a 7″ EP and other recordings, so this is their first, long overdue step into a larger vinyl release. despite the band’s age, there’s a real immediate freshness to the sound of the eight tracks here, partly from the live tracking – which was done at two shows in 2007, then remixed in 2009 and mastered last year, making for a full and resounding recording. There’s no audience noise, and the roughness around the edges is something bands try to meticulously create now, as opposed to this, which is basically similar to the one-take near-live recordings of the early 1980s. The music here is solidly great upbeat punk that verges into and then pulls back and forth from hardcore intensity with great dexterity. Using the advantage of two guitarists to layer some great very ’80s early So-Cal punk style moments, where it’s undeniably aggressive but still retains threads of melody. Straight forward yet inventive, the final track is a melodic sing-a-long in ENglish with bleak lyrics and is reminiscent of the scruffy GRIMPLE or early LOGICAL NONSENSE melody with caustic yet clearly shouted vocals. Lyrics are great reflection of the band’s immediate political and social environment, with English translations and also really pure P-U-N-K lyrics about personal freedom and inviduality. Great release! (KS) (F.A.M.E.D.)”