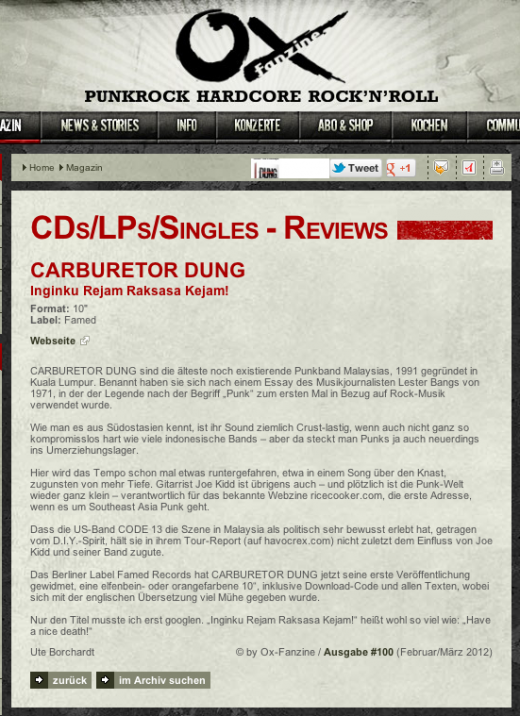 Germany’s old zine OX, issue 100 (Feb/march 2012): judging by the machine-translation through babelfish; this is not much of a review but more like a run-down on other stuff related to the album. And there’s a mention of us being “crust” which is kinda “hmmmmmmm”

“CARBURETOR the oldest still existing Punkband Malaysia is created DUNG, 1991 in Kuala Lumpur. Designated they itself after an essay of the music journalist Lester Bangs of 1971, in which the legend after the term was used â€žPunk â€œfor the first time regarding skirt music. How one knows it from Southeast Asia, their sound is rather Crust lastig, if also not completely as uncompromisingly hard as many Indonesian of volume – one puts Punks however there also recently into the reeducation camp. Here the speed is already times somewhat down-driven, approximately in a song over the prison, in favor of of more depth. Guitarist Joe Kidd is by the way also – and the Punk world is again completely small suddenly – responsible for the well-known Webzine ricecooker.com, the first address, if it concerns Southeast Asia Punk. That the US volume CODE 13 experienced the scene in Malaysia as politically very consciously, carried of the D.I.Y. – Spirit, grants it in its route report (on havocrex.com) not least to the influence of Joe Kidd and its volumes. Citizen of Berlin the label Famed record dedicated CARBURETOR his first publication now to DUNG, ivory or orange 10 â€œ, inclusive downloadcode and all texts, whereby with the English translation much trouble gave oneself. Only the title had I to only google. â€žInginku Rejam Raksasa Kejam! â€œis called probably so much how: â€žHave A nice death!â€œ