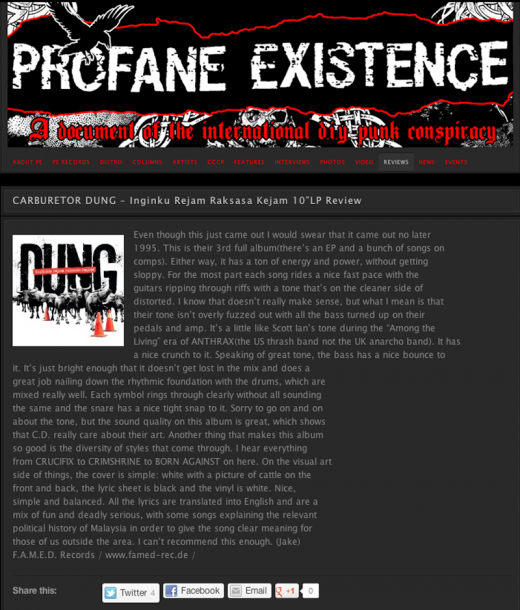 note: one of the best reviews we ever had really. just like the MRR review (see below) this guy listened through the album and listened intently enough to pick-up certain things other reviewers would usually miss and dismiss. seeing that PE is usually more of a crust-biased zine, we actually hesitated to send this to them but probably we’re lucky it landed on a reviewer such as Jake. made our day!

Even though this just came out I would swear that it came out no later 1995. This is their 3rd full album (there’s an EP and a bunch of songs on comps). Either way, it has a ton of energy and power, without getting sloppy. For the most part each song rides a nice fast pace with the guitars ripping through riffs with a tone that’s on the cleaner side of distorted. I know that doesn’t really make sense, but what I mean is that their tone isn’t overly fuzzed out with all the bass turned up on their pedals and amp. It’s a little like Scott Ian’s tone during the “Among the Living” era of ANTHRAX(the US thrash band not the UK anarcho band). It has a nice crunch to it.

Speaking of great tone, the bass has a nice bounce to it. It’s just bright enough that it doesn’t get lost in the mix and does a great job nailing down the rhythmic foundation with the drums, which are mixed really well. Each symbol rings through clearly without all sounding the same and the snare has a nice tight snap to it. Sorry to go on and on about the tone, but the sound quality on this album is great, which shows that C.D. really care about their art.

Another thing that makes this album so good is the diversity of styles that come through. I hear everything from CRUCIFIX to CRIMSHRINE to BORN AGAINST on here. On the visual art side of things, the cover is simple: white with a picture of cattle on the front and back, the lyric sheet is black and the vinyl is white. Nice, simple and balanced. All the lyrics are translated into English and are a mix of fun and deadly serious, with some songs explaining the relevant political history of Malaysia in order to give the song clear meaning for those of us outside the area. I can’t recommend this enough. (Jake)”