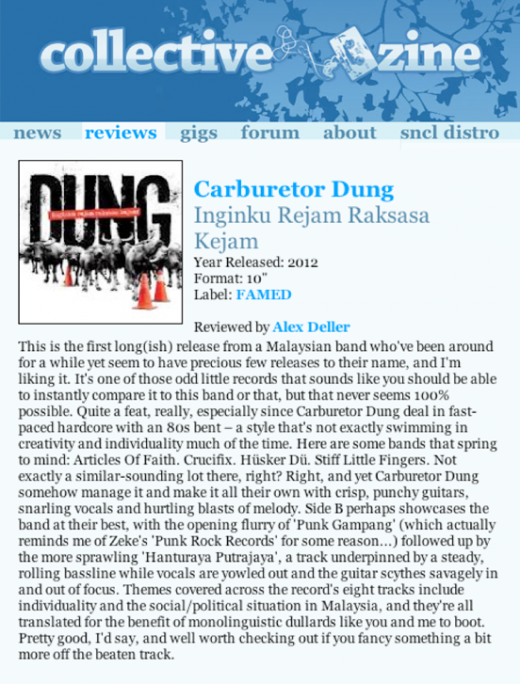 Finally Collective Zine UK reviewed our Inginku Rejam 10″. Much thanks!

This is the first long(ish) release from a Malaysian band who’ve been around for a while yet seem to have precious few releases to their name, and I’m liking it. It’s one of those odd little records that sounds like you should be able to instantly compare it to this band or that, but that never seems 100% possible. Quite a feat, really, especially since Carburetor Dung deal in fast-paced hardcore with an 80s bent – a style that’s not exactly swimming in creativity and individuality much of the time. Here are some bands that spring to mind: Articles Of Faith. Crucifix. Husker Du. Stiff Little Fingers. Not exactly a similar-sounding lot there, right? Right, and yet Carburetor Dung somehow manage it and make it all their own with crisp, punchy guitars, snarling vocals and hurtling blasts of melody.

Side B perhaps showcases the band at their best, with the opening flurry of ‘Punk Gampang’ (which actually reminds me of Zeke’s ‘Punk Rock Records’ for some reason…) followed up by the more sprawling ‘Hanturaya Putrajaya’, a track underpinned by a steady, rolling bassline while vocals are yowled out and the guitar scythes savagely in and out of focus. Themes covered across the record’s eight tracks include individuality and the social/political situation in Malaysia, and they’re all translated for the benefit of monolinguistic dullards like you and me to boot.

Pretty good, I’d say, and well worth checking out if you fancy something a bit more off the beaten track.