DUNG interview with Time Out KL – The Unedited Version

A tweet from the Time Out KL magazine dated 6th Dec pointed us to a web-version of an interview they did with Joe in mid-August. We checked it out and found out the interview had been severely edited, making it feel rather disjointed. It’s prolly a space-saving act for the printed version (which we haven’t seen as yet) but they could have put up the full version for the net version, no? Also, there’s no credit on the picture used; we did asked them to properly credit the pix. Btw, it’s taken by our mate Ady Shutterscream, shot at a show at Seventh Heaven, Tampin a few years ago. 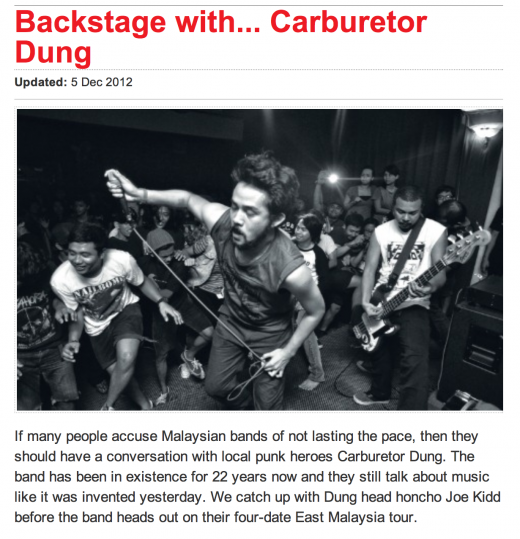 Anyway, someone asked for the full version so here it is, warts and all…

1. After nearly 22 years of playing music, what keeps you guys soldiering on?

DUNG: Definitely sex, drugs & Rock’n’Roll. Yup, honest! Woefully though, nowadays it’s all about good company, great food, Rock’n’Roll and precious time away from the spouses & children – that doesn’t sound as sexy in’nit? Anyway, the term “soldiering on” makes it sound so terribly laborious. No. We are NOT soldiering on. That would paint us as a bunch of heroic romantics on a 22-year treacherous quest to conquer Mordor. Nope.

There have been people coming up to us before a show and asking (in all seriousness), “macamana perjuangan DUNG?” and we would roll on the ground laughing.

Gawd forbid, DUNG is NOT a “carma” band (ask Datuk A. Samad Said). We are not signed to any label, any management company nor a publisher. We didn’t surrender our collective liberty and opt for binding contracts, liabilities and the attending cages and charades of the so-called “music industry”.

Nope, we are not signed to any entity and we don’t want to. DUNG is a DIY punk band, everything is under our very own control; we recorded, pressed and release recordings under our very own label. We have no manager, the band manage itself. The prolonged continuity of the band does not ensure we’ll be able to pay our rent or bring food to the table and that’s how we like it, we don’t rely on the band’s earnings (earnings? what earnings); every single one of us has a professional job we love doing. The band is our creative vehicle; a free-form venture; proudly hi-energy, lo-culture.

So why are we still together after all these years? It’s still helluva fun.

2. Tell us more about the new album. It’s the band’s first in quite awhile right?

DUNG: Yes, it took more than a decade to put out our latest album Inginku Rejam Raksasa Kejam. The last one, The Allure of Manure, came out in 1999. There are a few reasons there, including our collective laziness (which is celebrated with relish, mind you). We finally decided to record when we had enough good material to commit to tape. So in late 2007, we pooled RM300, booked a studio for 16 hours and recorded nine songs live in two nights.

But it took us another four years to finally get it mixed, mastered and put out; this is due to Joe being a perfectionist ass. He didn’t like the various mixes done. That is until a friend in the States told him to just send any one of the five different mixes for him to start mastering the tunes. So Joe chose one mixing session in random, zipped it up and sent it to California.

The resulting mastering work turned out to be beyond our imagination. It’s good. Only then we decided to release it; and it was out in late December 2011 as a 10″ vinyl in Berlin, Germany; while the CD version came out over here via our own label Ricecooker Recordings in May. At this point, we’ve sold 800 copies of the CDs so far, all by-hand or mail-order.

The 10″ vinyl version, available in three different colored wax, can be ordered from Berlin (http://www.famed-rec.de). The CD, which comes in a special box complete with a big poster, a cotton-patch and a vinyl sticker, is available from us, just write to therealcarburetordung@gmail.com.

3. Why still bother with an album? Most people seem to think albums are an outdated concept

DUNG: We don’t think it’s an outdated concept. A properly done release clocking more than four minutes is still a lot funner than hearing one or two songs on a sitting, especially when it’s balls-out short-tempered rants. We would want more rantings! When you sit down with classic Motown recordings, lets say Martha & The Vandellas, you would not be satiated until it’s a 40 minutes or more beautiful romp through their amazing catalogue. Heatwave! Dancing in the Streets! Nowhere To Run! Quicksand!

That said, our next releases will be mainly on 7″ vinyl, with four songs tops. The songs then will be made available for downloads, for free. Prolly on tapes too, but no more CDs, unless it’s a collected compilation. That’s the plan. This can be done easily since we are now running our very own recording studio (KerbauWorks), enabling us to do a lot of side-projects and solo releases. We are now writing new songs for DUNG while preparing to remaster and rerelease of 1999’s The Allure of Manure for the very first time on vinyl.

4. What’s your motivation for going out on tours? Many bands around these parts seem to not bother.

DUNG: That’s their loss lah. They don’t know what they are missing! Touring and playing live in a setting unfamiliar to us is the ultimate fun. You’ll meet new people, seeing new vistas every single day, playing to strangers who would instantly become your lifelong friends; and then there’s the food. The highlight for us is discovering, tasting and getting our faces stuffed with excellent food you can’t easily get in KL. From the amazing ikan patin masak kuning with tempoyak in Temerloh to briyani chicken masala in Penang to crispy pecel lele in Bandung to homemade rice wine in Manila. You don’t tour? That’s sad.

5. What do you think has changed most dramatically for the local music scene since you guys first started?

DUNG: The death of the majors, the collapse of the music industry as it used to be. Good riddance. The so-called industry has been exploiting our local talent for years, raking in the money while giving the acts pitiful leftovers. Talented people were milked dry, with no effort to nurture and enhance their potential for any sort of creative progression. In fact many were forced to wallow in formulaic trenches, feeding them with songs and lyrics not coming from their very own selves; thus effectively killing these talents from realising their full potential. In the end, the “profitable” trends died and the artists died with it. We have always been up in arms over these profiteering, bloodsucking vampires. Funny thing now is the rise of the so called “independent” bands. They are now “indie” because the industry’s dead, there are no labels who want to sign bands anymore, NOT because they want to be independent; not because they are against the blatant exploitation rampant in the industry. Worse, these bands are now using “indie” as a badge of honour. Pathetic. We find that totally hilarious!

6. Any local bands/acts out there that’s caught your eye?

DUNG: There are a lot of them in the underground DIY scene, which very vibrant for the past six years and more; THE GARRISON, CRIMESCENE, OSMANTIKOS, SARJAN HASSAN, ANGKARA, APPARATUS, THE MINDLESS SHOW, DUM DUM TAK, PUSHER, INFINITE DELAY, ATOMIC DEATH, ALWAYS LAST, TOOLS OF THE TRADE etc. etc. too many to mention. As of the recent ones, we believe the revitalised MAHARAJAH COMMISSION is the one to look out for. On the more mainstream-friendly level OJ LAW has a lot of good songs, but quite disappointing live. THE FRIDAYS are good, very literate, witty songwriting there. Local post-rock bands sound the same, most of them display no dynamics whatsoever, honestly they bore us to death really; so far that Singaporean band THIS IS ATLANTIS is the only one with a bit of natural verve in them. Another good band from Lion City is STELLARIUM, now that’s awesome feedback-drenched dream-pop. A good thing to experience nowadays is the local metal scene reinvigorated with young fresh new blood: HUMILIATION, KILLER CORPSE, LAVATORY, BLOOD LEGION etc. Still nothing much on the radio though, but BFM has been pretty cool, it would be cooler if they would break away from those rigid playlists prepared by a handsomely-paid music consultant; lets allow real DJs who love good music to spin their very own selections lah. Save money also what?

7. Globally, has punk music changed since the 70s?

DUNG: If anyone could be bothered enough to look at it proper, it’s been very healthy. As always bands are branching out to embrace a lot of other influences; that’s what punk is supposed to be, but of course some kids would rather keep to the trad sounds – recycling the norms, turning it into a rigid uniform thing, which is quite retarded but that’s OK; after all it’s everybody’s choice to do whatever he/she wants. Nowadays a punk band could be playing drone, or mixing black metal with crust, or bringing back garage-rock but fixing it with electronics, or dishing hardcore-punk meeting the hysterics of flashy heavy rock, etc.

The problem with “punk” in the eyes of the casual listener is its has-been simpleton, moronic image. That’s a very narrow understanding of what it’s all about. Thus, punk is now consigned to the history, like it’s just a flash in the pan, with no consequence or influence to impart forthwith or to be learned from. That sort of blinkered, tabloid-informed thinking never bothered us though. It’s been 30 odd years and there’s wide-ranging sounds, attitudes and political ideas coming from the punk subculture since Year Zero; most of it not highlighted in the mainstream press/media/airwaves of course, but that’s your loss; especially if you rely on such channels to find anything of substance or of any cultural importance. However, for those who dig and dig proper, you will be awesomely rewarded; there’s a treasure-load of excellent punk and unpunk out there. Very simply; tepuk dada, tanya selera.

8. When would you know it’s time to hang up those guitar strings and call it a day?

DUNG: When picking up a guitar, jamming with your good friends and having a laugh becomes a chore; when there’s no more fun to be had by being who you are. Now that’s a tall order.