On Saturday 21st December 2014 Joe, Fendi & Bullet worked on a song written way back in 1996 and here’s a teaser: two minutes intro to the total six minutes.

The origins of the Gibran Song goes back to when Lee Pilgrims joined us as replacement for Shahlan in the mid-90s. It was also a time when many of us were deeply affected by books of Khalil Gibran’s poems and writings. Joe wrote the song, complete with lyrics and auditioned it to both Fendi & Lee at his house. We recorded the session with Joe on an electric guitar and singing with Fendi bashing lines on an acoustic guitar, while Lee do bits of backing vocals.

The band tried working on the song with our old drummer Ollie when we were constantly jamming at the small rehearsal studio on Jalan Maarof, Bangsar (across the railway line from Brickfields where we lived). Twice we tried to make sense of it but it didn’t work out. The song was then discarded and forgotten.

Somehow in the mid of 2000s, Joe found the recording and digitized it with the mind that it should be worked on and recorded properly. This only happened last Saturday at KerbauWorks.

At the moment, we are still working on it – some changes need to be done in terms of sections of the song, while the lyrics itself needs an overhaul.

Pixs of us working at KerbauWorks: 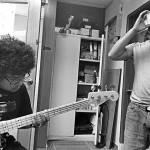 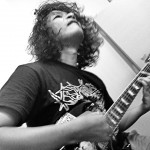 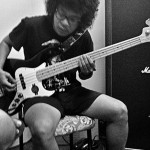 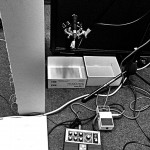 below is the Boss Space Echo pedal lent by our friend Paul. First time Joe’s using it. 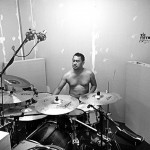 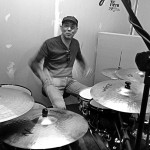 Paul, our drum-tech stand-in for the day 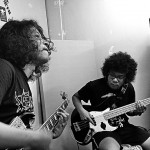 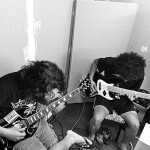