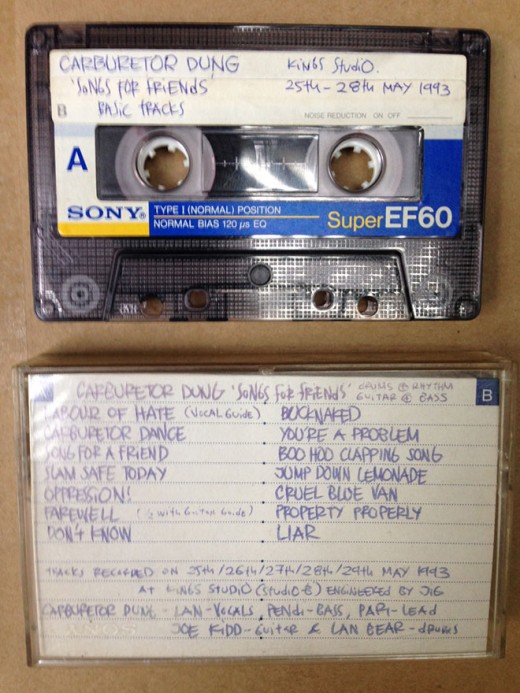 So we found this tape from way back 1993, the days when we were working on our first album. All the 14 songs recorded in May 1993 are here, but rough-mixed as basic tracks; meaning only featuring drums, bass and guitars; no vocals or guitar solos – that is apart from one song “Labour of Hate” which features Joe’s vocal guide.

We found the mix on this tape and it’s overall sound much clearer and well-balanced than the actual album (which was put out back in September 1993). Joe has always think the proper release features very badly tracked vocals and uneven backing vocals. The final mix is also draggy, it is as if something went wrong during the transfer; the sound seems stretched and warping somehow. Back in the day, we thought it’s because of the way we down-tuned the guitars. We forgot how low it is; probably C!

Anyway, here are two tracks we digitized from it, both put up bandcamp without any tweak.

We believe we could do something with this. It’s finally a chance for us to rework the album according to what we want, 21 years later! Our original vocalist Shahlan and lead guitarist Pari could get back in the studio and track their parts, and thus prepare it for a rerelease. We’ll shall see.