So yeah, it’s been 21 years! Songs For Friends was released on September 27th 1993. That’s like a millennium ago to kids nowadays! Listen to ALL the songs below. 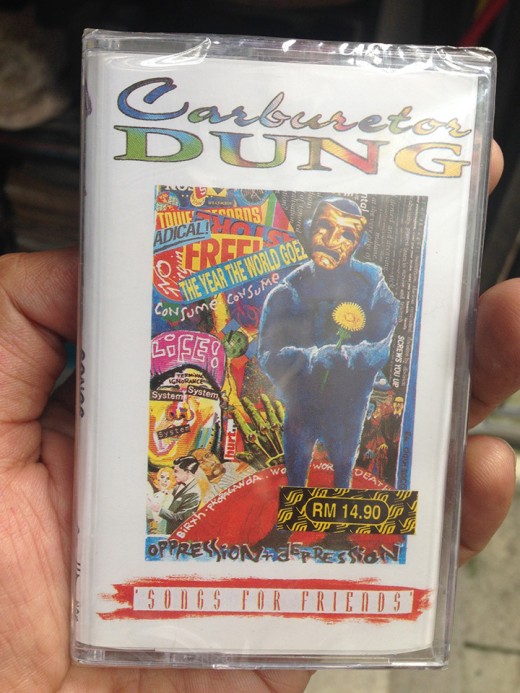 All the songs here
(sorry, this playlist was not playing but now it’s fixed!):

One day in January 1993 we were hanging out at the Central Market (as per usual) and Ery of the band SLUMSCUMS came up to me saying that the local indie label VSP wanted to meet Carburetor Dung.

After much discussions between us in the band (I resisted at first, as at the time I had this crazy pipe-dream of forming our own label and release our own recordings; this was when I can’t even pay my room’s monthly rent!), we finally went to see VSP. They were very interested in signing us up and one of the main questions asked was, “how many songs do you guys have?”

We had ONE song (“You’re A Problem”) but we told them we have 14 songs!! Yes, FOURTEEN! VSP was so impressed, they signed us up for two albums.

And so throughout the February, I was holed up in my room in Jalan Ang Seng, Brickfields, writing songs like a madman possessed. All I had was a double-deck tape recorder and a borrowed guitar; and I was chasing this unknown-but-coming-real-soon deadline.

I remember coming up with Boo Hoo Clapping Song. It was somewhere in the middle of Ramadhan. I called up the guys in the band to come and listen to it as I just know it’s a good one. After everybody listened to it, we all went to buka puasa at the junction of Jalan Tun Sambanthan 1 and Jalan Ang Seng (there was a Kelantanese mak cik stall there) and we all can’t help but being so happy with Boo Hoo, to the point of keeping on humming the melody and drumming on the table-top.

But at the point, we haven’t got 14 songs, so the songwriting had to continue. If I remember correctly, the song “Carburetor Dance” was one of those which we had to finish up writing in the studio, while recording the album! We were called up to record at King’s Studio somewhere in the middle of 1993 and at least two songs only had basic riffs.

Anyway, at the end of the day, we all made it. We came up with the 14 songs we promised. The length of the album came up to 52 minutes in total. If we want to release that album on an LP now, we wouldn’t be able to fit all the songs. It would have to be a double-LP, at 45RPM and preferably gatefold! Hahaha!