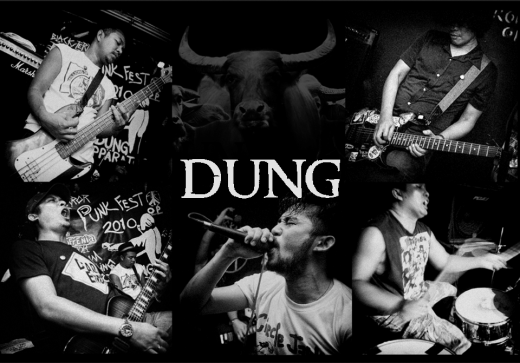 After being held in the Police lock-up with about 130 others for three nights and three days in August last year (long story :)), DUNG have been called up to play several shows but we had to decline since both our bassist and drummer have been very busy with their respective projects, especially a feature film which is under pre-production at the moment.

For a while, we thought we should form a project band without our bassist since he’s the busiest of all. All agreed, and we came up with a name MANUREMEN – even put up a facebook page but then nothing happened.

So when will we get back and be active again? At the moment we’re not sure, but another song from our recordings at KerbauWorks which produced the DUNG/SMZB split-7″ is soon going to be released as another split-7″ with Singapore’s “hardcore supergroup” called LC93. That said, we don’t know when this vinyl will come out but we are drawing the art for the sleeve and such.