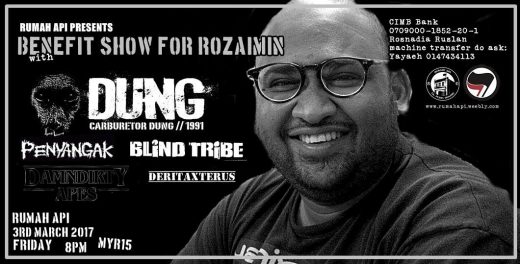 On the 20th of February 2017 we were all alarmed by news from Penang that our good friend Rozaimin being hospitalised at the island’s general hospital. Early reports pointed to pneumonia due to severe lung infection. Min was warded at the ICU of the hospital, induced to sleep and attached to a breathing apparatus.

This show is hurriedly organised by Man Beranak of Rumah Api. The line-up firmed up and a flyer was posted on social media channels on February 23rd.

*by the time the show happened, Min had thankfully recovered.

*this is the third show DUNG played with substitute drummer Asan from CRIMESCENE, SARJAN HASSAN & WHIRR.