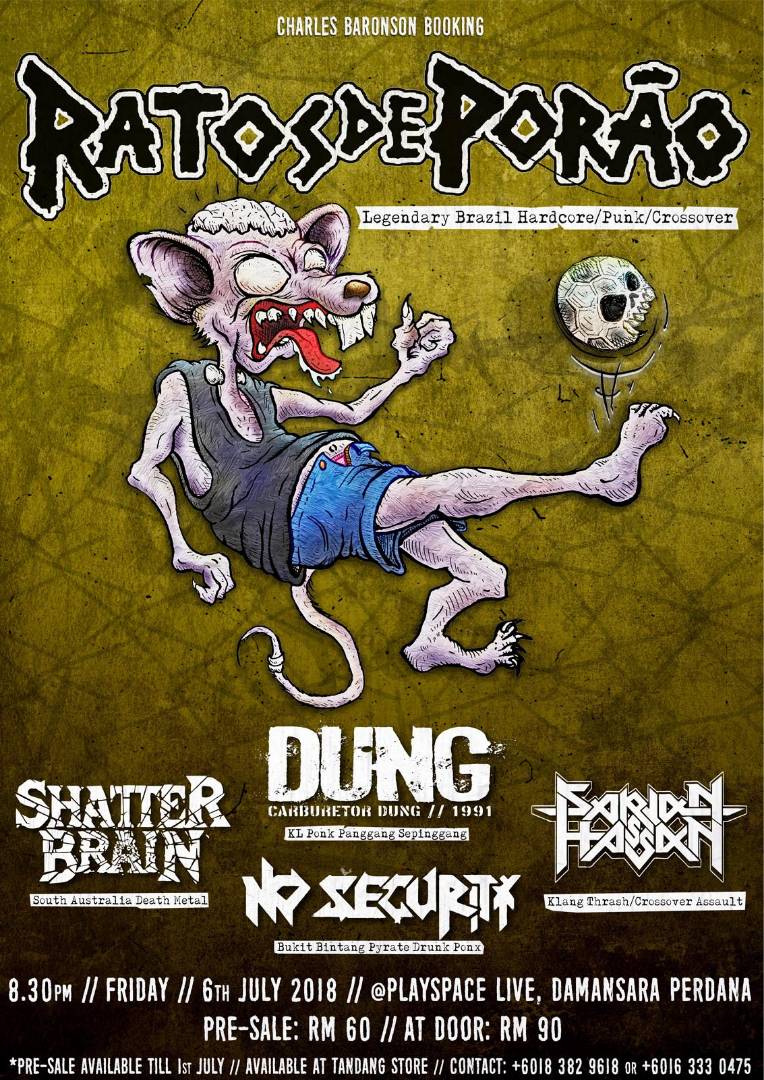 DUNG appearing with Brazilian legends RATOS DE PORAO on their first appearance ever in the country. There are also Australia’s death metal band SHATTER BRAIN and our friends NO SECURITY and SARJAN HASSAN.

• PlaySpace Live could be the best-sounding venue we have ever played. I noticed they were using the recent Marshall DSL head series for the guitars, those are tube amps. The venue itself is pretty fucking far from where I live but the way it’s situated on the ground floor with the main door opens straight from the outside into the live room is highly effective. If you wanna smoke, just step outside into the open-air corridor. The stage, meanwhile, is a bit high for a small venue; probably about 3 and a half feet. Maybe it’s good for discouraging audience from climbing up, but a lower stage would make it more intimate. I would estimate the space would fit 200 shoulder to shoulder. Also heard the rental for a weekend show is RM2,200 and that comes complete with the backline and PA, both of very good quality.

• Talking about the guitar amps, I ended up using straight-to-amp gain instead of struggling with the many pedals I brought > tetsting out Paul’s classic Echo, a Tube Screamer and such. No need. Just plug straight into the amp and crank it up.

• The show starts pretty late with NO SECURITY opening it up. Caught parts of the ending, good band, if very traditionalist UK82 worship. They were followed by Adelaide’s SHATTER BRAIN; a young metal band who’ve played with RDP in Bangkok the night before. Any good? Well, they are a very capable band, good playing and energetic but I think they lacked “songs” which would make my ears pricked up. very nice guys.

• Next up were SARJAN HASSAN who features our own back-up Drummer Asan, and they were good; crossover metal with more hardcore punk in their veins than metal. By the end of their show, SH were asked to play on and fuck about on stage to prolong the time since RDP’s flight was delayed in Bangkok. The Sarjans complied with a rendition of Blues Gang’s Apo Nok Di Kato, with NO SECURITY’s mainman Arol on vocals.

• DUNG went up next and we played a setlist devoid of the early songs. I flubbed on some chords as per usual but overall it’s okay. Thing is by the time we’ve done the setlist we had, we were asked to play some more and so a rather ramshackled rensitions of old songs from Don’t Know to Our Voice to Oppression were dished out just to keep the stage going until RDP arrived.

• The show was poorly attended – i would say less than a 100, while the expectation was around 180 to 200 for it to break even, and due to RDP coming in very late, I believe some of them waiting since the late evening had to leave. We do hope the organisers made back their money spent tho’ – well, maybe not.

• As mentioned, RDP appeared at the door very late, but I can’t recall at what time, could be round 11.20pm or later. BUT once they started playing they played for almost an hour and they were really good. All of the members, seasoned with time, had all of us transfixed with some of the younger ones starting sparse mosh pits. Admittedly I haven’t been listening to RDP for decades. Yes, I found them very early on in the early 80s, but never really di get into them proper, preferring their fellow Brazilians OLHO SECO & COLERA. That said, the band won me over. Not in terms of their songs much, but their sound and relentlessness. They never stopped, and I hope they would go on demolishing venues everywhere.

• It was good to see several old faces at the show, especially the metalheads from Campbell, including Jaie of Sil-Khannaz, Ajizz Rongak of Vortex from the East zine, and Kombat of The Pilgrims. basically the ones who discovered RDP in the late-80s to the early-90s came to see the show, not in large numbers but they were there; most seen after the show mobbing the merch tables for RDP’s shirts and getting their records autographed by the singer.

PICTURES taken from friends who posted them on facebook: