THE EARLY YEARS
the central market, amerah, teh tarik and borrowed guitars

In 1990, Joe Kidd started a band with his friends who were living or hanging-out at an apartment in Jalan Scott, Brickfields, Kuala Lumpur. The guys were ex-RATOR bassist Ogy, a promising solo guitarist Bart Rulshah and Che Mat on drums; Joe tried his hands on the other guitar and vocals.

This very early version of CARBURETOR DUNG jammed about 3 times, doing covers of BLACK SABBATH’s songs and trying to write our own tunes in the style of VOIVOD and DIE KREUZEN, (at least that was the idea in Joe’s head) â€“ but the band never managed to go further than the rehearsal studio at the Wilayah Complex: crap jamming sessions and a few group pictures taken in the complex’s toilet.

There was a young band which started out as STORMFISH in late 1991, featuring Fendi – bass, Azreen – guitar/vocals and Joe Mechanic – drums.

Later, Joe Mechanic was replaced by Adam, an old friend of Fendi’s from Taiping. Their main practice room was Hellions at Medan Mara or Amerah Studio in Pertama Complex; the jam studios of choice for the KL scene then.

In early 1992, Joe Kidd, who at the time was playing with his band DEFLOWERED, joined in on bass for one or two sessions, before handling the guitar. Around mid-92, the band changed name to CARBURETOR DUNG (a name previously used by Joe’s first ever band in 1990; see above). A fellow Terengganu friend of Joe’s, Ex-MALARIA and ex-STONED CROWS drummer Shahlan joined in during the same time as the name change, this was because drummer Adam couldn’t make it to rehearsals regularly; while guitarist Azreen left due to his studies (he later formed SUBCULTURE).

The band at that moment in mid-1992 were:
Joe – guitar/vocals, Fendi – bass/vocals and Shahlan – drums.

They carried on as a 3-piece before getting A.R.T.’s guitarist Shahfari on lead guitar. By late 1992, INFECTIOUS MAGGOTS & ABC… DEAD’s guitarist Lan Bear joined as drummer, while Shahlan became the vocalist. 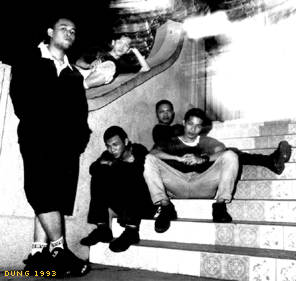 This line-up recorded a song (You’re A Problem) in January 1993 at FGM Studios for the Sonic Asylum compilation, A Circle Of Friends. (This song never end up in the actual release due to CD signing to VSP for two albums in early 1993.)

CARBURETOR DUNG recorded their first album at the King’s Studios in late June to early July 1993. 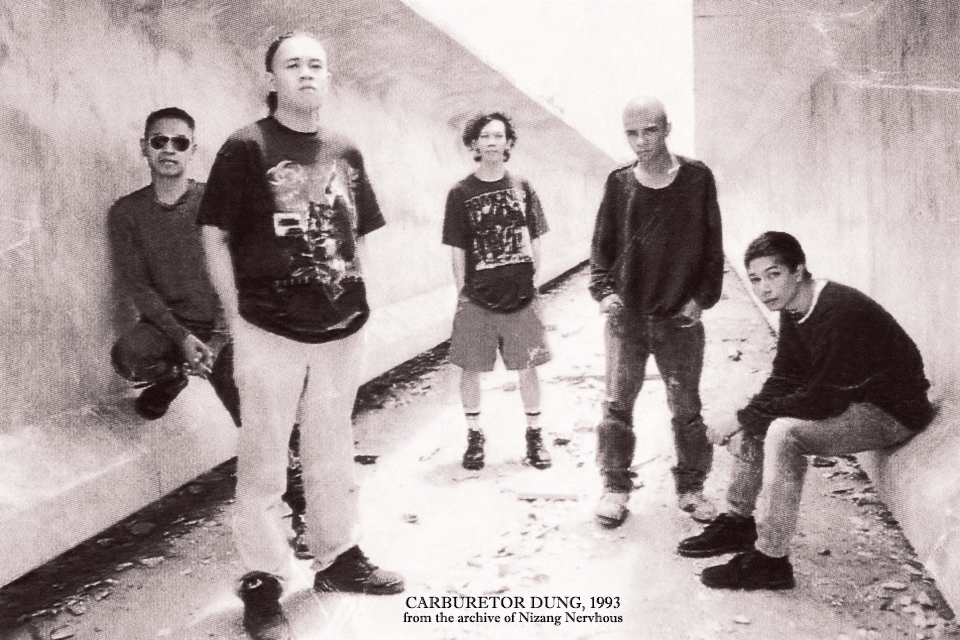 NOTE: VSP put out a flyer on the band when they were going to release the album: go here to see it

The album “Songs For Friends” was released on September 27th 1993. Just before that the band played their first ever gig at The Revenge Of The Rats (August 30th 1993) at Garfunkel Pub, Life Centre, KL along with SUBCULTURE, THE SPLATTERS, THE PILGRIMS, CHRONIC MASS and LOVELY UGLY CARNIVAL. (*this is the first gig featuring an-all non-metal line-up for the Malaysian underground scene, before that punk bands were sharing stages with thrash/death metal bands).

From then on, the band played 17 gigs, all over KL, Ipoh, Penang, Kuantan and Seremban. The last concert for the line-up was the Psycho A-Go-Go concert at Fui Chui Hall, S&M Arcade, KL on April 1st 1995.

Later that month Lan Bear and Shahfari left the the band and were immediately replaced by two new members who were actually veterans of the local scene: Lee (ex-THE PILGRIMS/HIJRAH) and Ollie (then ex-SILENT DEATH and ZAF). Shahlan ditched the singing and returned to playing guitar.

*note: during a lull in 1994, Joe & Fendi formed a project band called THE SHITWORKERS.

back to
>> Carburetor Dung: Brief History