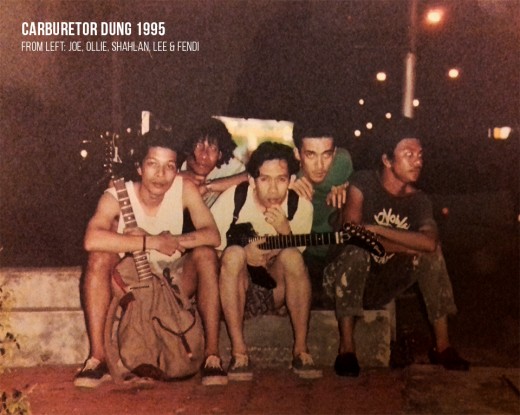 Played a lot of gigs, attempted to record their next recording at the Dreamwalk Studio II but forced to stop halfway due to the studio being liquidated by internal squabbles. Shahlan left mid-96, he jammed with a few new bands (including THE BASIC RIGHTS) but disappeared once he married a year later.

This line-up played a few gigs up north, including in Penang and Ipoh with ex-STONE CROWES Jijoe on lead guitar.

Recorded the three songs on Dari Jemapoh Ke Manchestee soundtrack without Lee after he left for a vacation in Germany.

Jijoe recorded a track in that comp as EAT BOILED CROWE, appeared as a part of THE REPUBLIC OF BRICKFIELDS and then helped with the recordings of SPIRAL KINETIK CIRCUS debut album and KOFFIN KANSER’s debut, before going back to the East Coast to and devoted his time to fishing!

At this moment, Lee was away and professed the wish to leave the band. The band was thinking of mutating into THE SHITWORKERS, as that was Joe & Fendi’s project band in 1994. This line-up played once in Ipoh with Joe handling vocals.

Lee came back into the fold after a lengthy stay in Germany. He also joined DEP, the label (not the band!) and released an album by his German friends called MASON MESUD STEVENSEN. He also appeared on a 7″ by Mason Mesud Stevensen, which was recorded in Germany.

This line-up recorded The Allure Of Manure mini-LP at the end of ’98 and played a few gigs.

+ Asma – drums for one occasion.

Irman (DAMAGE DIGITAL’s guitarist) joined in after coming back from his studies in Japan and started living with Joe & Fendi.

This line-up played allover the country right after The Allure Of Manure was released, starting in Kuala Terengganu (with DEP’s Asma on drums) to Kuantan to KL to PJ to Seremban to Segamat to Batu Pahat and Taiping (the only gig without Irman, who had to visit his parents).

The band went into a limbo. Ollie went on to play with ska band GERHANA SKACINTA, Fendi and Joe restarted their 1994 project band THE SHITWORKERS. Lee started learning didgeridoo and appeared with WIPE OUT! (a band consisting of Kuantan surfers, an all didgeridoos ensemble)

Meanwhile our first ever vinyl release, Sheepfarming In Malaysia, was put out by Hideous Records in London, UK in February 2000.

Carburetor Dung didn’t do nothing at all. Fendi and Lee both got married during this period. By 2001, Joe started playing alone as “667, NEIGHBOUR OF THE BEAST” (either with an acoustic guitar or a computer), formed a fun “Western” acoustic band called THE FAMOUS COWBOYS and also a one-off THE MORONES (a fast early-80s punk rock cover band with members of AGHAST/HELL SISTER and MASS SEPARATION).

+ friends helping out:
Asma – drums / Meny – second guitar (both of them, including Panther are veterans of the Kuantan scene, playing respectively in ENSLAVED CHAOS, DEP and many more)

note: Asma jammed with us a couple times but he had to work in Kuantan thus making it difficult for us to go on with him. He ended up playing with a short-lined band MONSOON.

Panther proved to be much more stable in KL and so we jammed with him constantly and he played with us on Sept 14th 2002. As for Meny, we had a few rehearsals and we could have played with him on second guitar at the Elements gig if the police didn’t stop the show. But after that he went back to Kuantan and then was hospitalised after an accident.

This line-up played without Meny at Unclogged XII, New Years eve. This is also our last gig with Lee (unless he comes back from Australia one of these days).

Lee left for Australia and Panther decided to concentrate on DEP, so that left Joe and Fendi looking for new members and planning for an album before the year’s out.

In June, three of our new songs appeared on the Non Conformity Volume One CD by Knot Records, featuring the last line-up recorded on a midi-disc!

In August, Fendi appeared on stage playing bass with his wife’s band KENANGA OREN while Joe played bass for a band called PROCREATION OF THE WICKED at Unclogged Merdeka.

Apart from that, there was nothing….