Apuk was at the time also drumming for KUCHALANA. This line-up played our 1st gig together at the Unclogged new years eve gig on Dec 31st 2003.

A pix of us with our old drummer Apuk right after the I Thrash show (Apuk faded out of the band by Dec 2005): 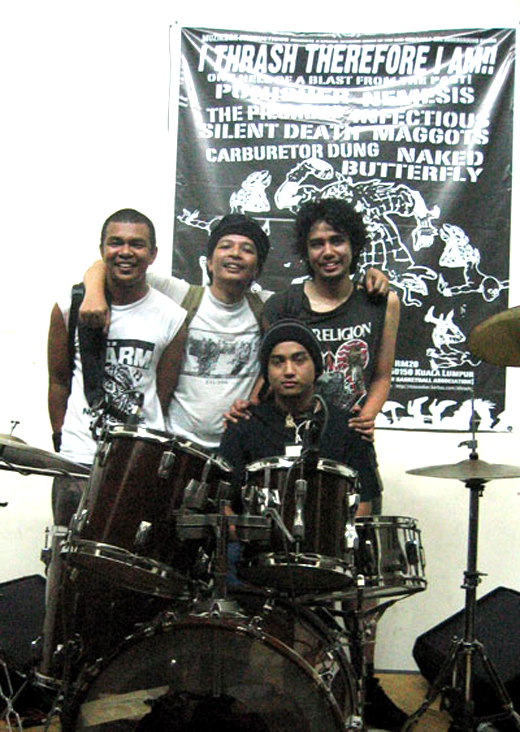 This line-up recorded a version of THE PILGRIMS’ “Johnny” (rehashed with our own lyrics) at BMW Studio, Sri Hartamas. The track appeared on The Dude Puked On My Lap compilation CD-R; a compilation of bands paying tribute to the songs of THE PILGRIMS. 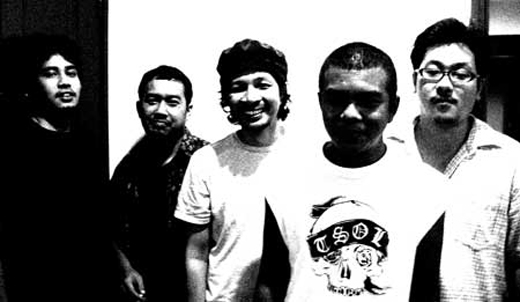 With Apuk busy being a session drummer and guitarist and bassist (!) for a lot of bands including shows with THE BLUES GANG (!), Dung had to find another drummer to do a recording for the Radio Malaya compilation. And so we called up Bullet (ex-NEMESIS/PUNISHER) who was the drummer for Joe & Fendi’s project band THE SHITWORKERS. We also called upon our old friend Yandsen (ex-MOXUANn) to play horns for the recording.

At this point, Apuk is still considered as our drummer and he’ll fill in if Bullet is busy. After the Radio Malaya session, Bullet has become our drummer, hopefully for as long as the band lasted. Yandsen will appear with us accordingly.

Tom first appeared briefly with us at the Oh Seven! Gone to Heaven new years eve celebration at the Annexe on 31st December 2007. The man is one of our old friends from the days of Piccadilly Club in the mid-90s and his still on-going band THE BOLLOCKS.

* Seed (DEFEAT / SKULLCRUSHER / THE ONE CHORD WONDERS) played bass for us at our 2nd Terengganu gig in Paka on August 8th 2009 when Fendi (for the first time ever) had to go to the film fest in Kota Kinabalu. His film (KAMI) managed to get a Jury Award.

* Asan AKA “Manusia Mesin” (SARJAN HASSAN / CRIMESCENE) joined DUNG as our regular substitute drummer in late 2016 when Bullet had difficulty in finding time for the band. Hassan drummed for us for three shows in the early 2017 until Bullet came back into the fold. The shows are: